It was the spring of 1959 and leaving St. Paul Union Deport the senior class of Harding High school was heading east to Washington D.C. and New York City by train. I was on board playing poker in the Dome throughout the night. Perhaps I was a youthful version of Sgt. Bilko as the cards kept falling my way. My only other memory was seeing the forges light up the hillsides as we passed thru Pittsburg. In Washington we saw all the famous sights. Unfortunately, we missed seeing “Ike”  in the White House as he was busy warning the nation against endless wars and the military industrial complex taking over. That hasn’t gone so well….:( 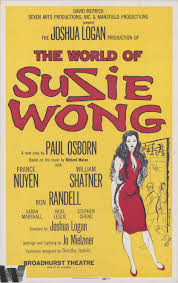 More famous places to see in New York followed. There was a real sense of vibrancy and excitement there.  Staying at the Roosevelt Hotel an evening out to world famous “Coney Island” was planned. Everyone was excited except me.  My mom had advised me that this night might provide a once in a lifetime opportunity to see a Rogers and Hammerstein musical. Its name was “Flower Drum Song.”. That morning before our tour bus left, I asked the man behind the counter if two tickets were available. “Not a chance,” he replied.  “It’s booked up months ahead, of course there might be a cancelation. Check back about 5 o’clock.”  I did but no luck. Then Plan B appeared. “If you want to see a Broadway play one recently opened right across the street from your first choice and within walking distance. It’s called The World of Suzy Wong.   To this day I can still claim I’ve been to a play on Broadway…..


Actor William Shatner has a unique place in the history of the romantic novel The World of Suzie Wong. Shatner, known for starring as Captain James T. Kirk in the Star Trek T.V. series, was the first man in the world to “woo” Suzie Wong in the original stage version. Shatner, 27 won the heart of a decent Hong Kong prostitute played by Vietnamese-French actress France Nuyen on Broadway between Oct. 14 1958 and January 2 1960. 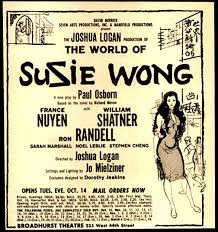 I have no real memories of the play itself except between the acts I bought a couple of very small classes of orange juice for the outrageous price of two dollars a glass. Of course my date was impressed with my largesse. Apparently the play was roundly panned by the big city critics so it didn’t last very long.  Later yet, a movie version was produced starring handsome William Holden.  I advised my mom against seeing that movie having giving her a somewhat sanitized version of the plays plot along the lines of “love conquers all”.  Fond memories from long ago...:)

Then and Now in the Wilderness 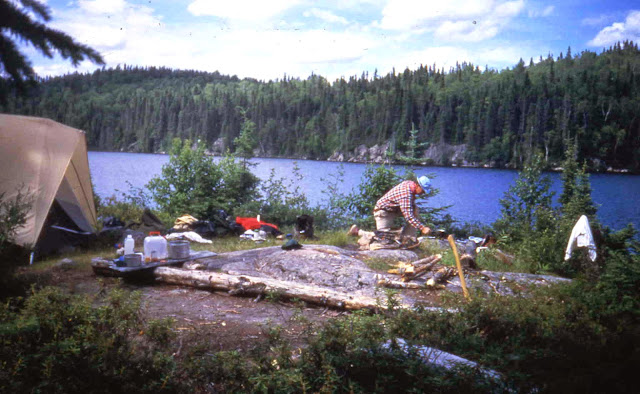 Back when I was still young as in my late forties, I still took hunting, fishing and canoe trips into the Canadian, Montana and Minnesota wilderness. This picture is from a two week canoe  adventure in northern Ontario, Canada. We explored a river system without seeing another person. Now almost thirty years later and well into the myriad aches and pains of the Golden Years my choice of adventures is severely limited. Thus, last fall Mrs. T. and I found ourselves on a three day bus tour to see the flora and fauna of Northern Minnesota.  Join us.... 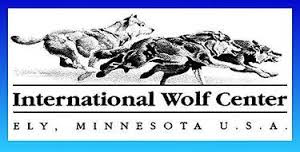 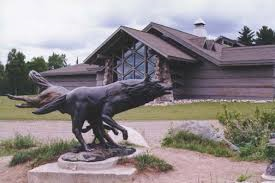 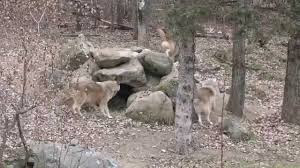 In Yellowstone Park,  Western Montana and the Boundary Waters Canoe Wilderness in Northern Minnesota I've looked for Wolves and heard a few at night but never actually seen one.  The Wolf Center was my last chance. The International Wolf Center advances the survival of wolf populations by teaching about wolves, their relationship to wildlands and the human role in their future. The International Wolf Center maintains a live wolf exhibit, featuring an ambassador wolf pack to enhance both in-person and online educational experiences. These ambassador wolves contribute to the Center’s mission by reinforcing  educational messages and by creating a connection with  visitors. 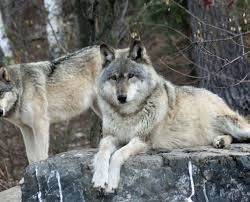 There is something very special about large wilderness predators be they grizzly bears in Montana, Brown bears in Alaska, Mountain lions in Idaho. Wading quietly in a trout stream seeing tracks on the shore the senses come alive as nowhere else. Cautious, silent, tuned in to every sound, aware.  The wilderness. There is nothing quite like it....:) 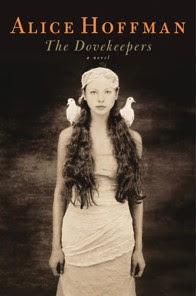 Perhaps you know the story of Masada. The inspiring story of the Jewish rebellion again the Roman Empire and final resistance to its mighty Legions from a mountain top. This novel is the story with a somewhat different perspective and twist. I found it very well done...  Click on Mark Twain above for details...

Posted by troutbirder at 3:36 PM 3 comments:

Dreaming of a Better World 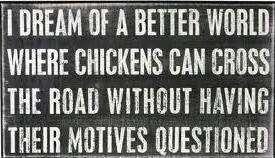 Oh that's bad!  Actually my real dream of a better world involves the current moron residing in the White House

Invited by our friends Mr. Science (Gary) and his wife Bobbie, we spent the day winter birding in  the beautiful Whitewater Valley.  And a bountiful day it was.  I won't list all the species and numbers. but a few highlights include many eagles (some nesting), lots of red tailed hawks, several  rough legged hawks also a few kestrels, plus a single Coopers Hawk.  There were  large numbers of the usual small and medium sized winter holdovers,  not including our human "snowbirds" who tend to hang out in places like Florida and Arizona. Lastly, the top sighting of the day was  20 Trumpeter swans,  a rescued species nearly extirpated in Minnesota some decades ago.  Two photos from Gary.  Plus a note on winter fly fishing. 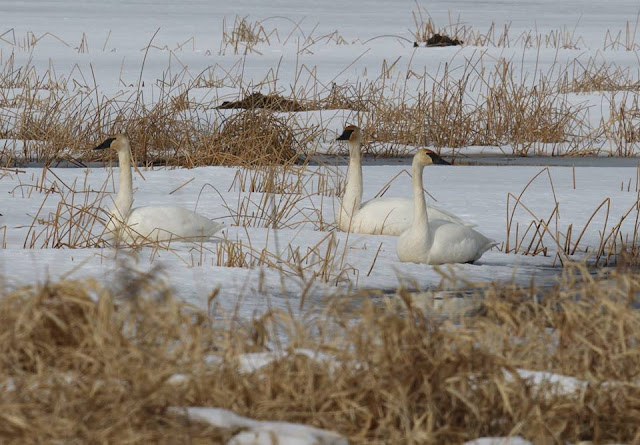 The very large and magnificent Trumpeter Swan resident once again in Minnesota. 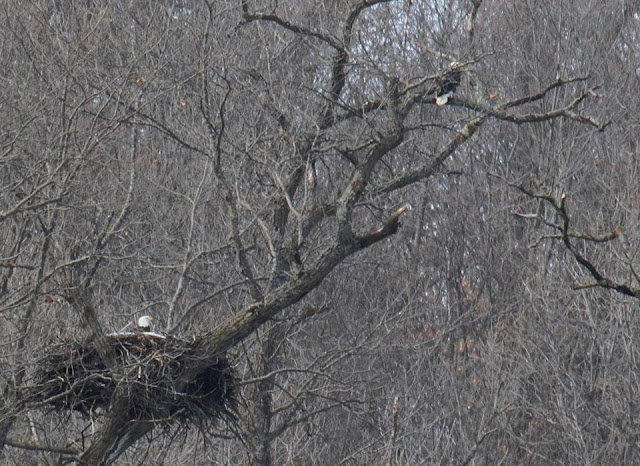 Many eagles were seen  today with three females on their  nests already.  Apparently it's  difficult to tell if they have laid eggs or are still redecorating a previously used nest.... 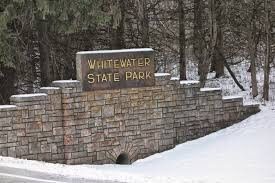 The Whitewater River and its' small tributaries are all excellent limestone trout streams.  Some have a open winter season. I've tried a few times but winter and fishing do not go together very well for me. Once camping in mid November at Mammoth Hot Springs Yellowstone National Park and fishing downstream on the Lamar River, with myself about freezing, cured me of the habit forever....:)

When I retired from teaching I was 62 and still loved the kids, history and geography. What I didn't love was how computers made us all more 'efficient" by requiring more redundant and unuseful paperwork than ever. I did a rough calculation several times and determined  most of the staff was wasting two hours a day on this nonsense.   For Special Ed teachers with Federal requirements it was in excess of three hours per day. We had just built a more "efficient" house for us largely paying for it with the sale of our old one next door to a woods we already owned. But not quite. My beloved spouse volunteered to work two more years and pay it off. Thus, I became a House Husband. She loved it when she came home to find dinner ready, the laundry done, as I had put serious study into these diverse tasks. Still there was a little slack time here and there and I needed to find a mentor on how to use it. He was a friend of Mrs. T's who lived with us and his name was Simba. 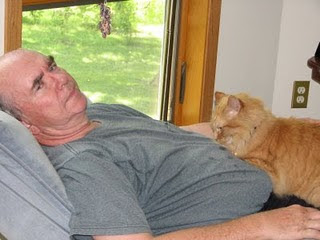 Yes this is Simba and this is how it all began. While I don't have any actual pictures of his mentoring retirement techniques, the following pretty much demonstrates the method. 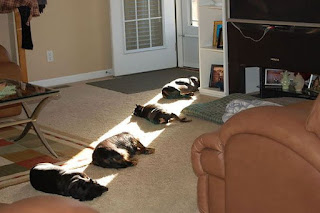 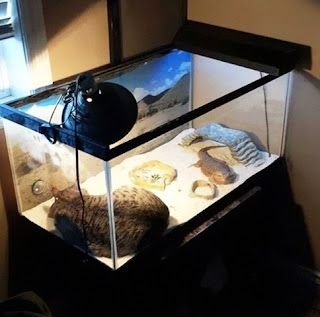 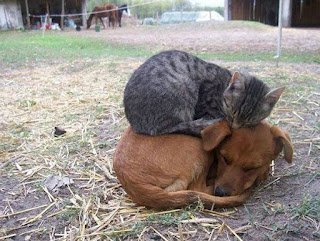 I found the idea to  follow the sun around the house all day and to nap the most effective. The aquarium sun lamp technique was definitely unworkable and I also  had my 130 German Shepard Baron pile on top of me for warmth just plane dangerous. Thus I survived two years of retired house husbandry very amenable and WE BOTH LIVED HAPPY EVER AFTER IN RETIREMENT.....:)
Posted by troutbirder at 9:14 AM 14 comments: 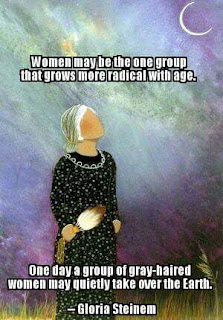 Though I abhor stereotypes, in this case based on womens tendency to family and community values and mens tendency to value dominance, power, money and war, I hope to live to see gray-haired and young women take over the Earth. We'd all be better off.... 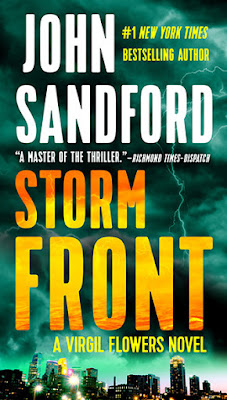 So in spite of not being regular thriller reading I inherited one of premier mystery writer John
Sanford . So as a first time reader of him here is my take on one of his many novels. Click on Mark Twain above to find out...:)

Posted by troutbirder at 10:19 AM No comments: