Old Man River, A Book and Me 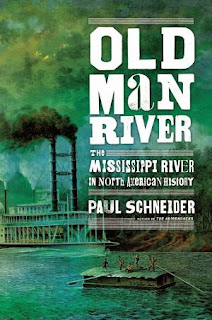 In Old Man River, Paul Schneider tells the story of the river at the center of America’s rich history—the Mississippi. Some fifteen thousand years ago, the majestic river provided Paleolithic humans with the routes by which early man began to explore the continent’s interior. Since then, the river has been the site of historical significance, from the arrival of Spanish and French explorers in the 16th century to the Civil War. George Washington fought his first battle near the river, and Ulysses S. Grant and William T. Sherman both came to President Lincoln’s attention after their spectacular victories on the lower Mississippi.
In the 19th century, home-grown folk heroes such as Daniel Boone and the half-alligator, half-horse, Mike Fink, were creatures of the river. Mark Twain and Herman Melville led their characters down its stream in The Adventures of Huckleberry Finn and The Confidence-Man. A conduit of real-life American prowess, the Mississippi is also a river of stories and myth.


As a boy I played and fished along the Mississippi River as it wandered through St. Paul below our home on the Bluffs above the river. Later, I even took my fiancée on a date, a canoe outing near Pigs Eye downstream.  I was  bow and arrow fishing for carp (how romantic and she even married me). Later,  when we moved downstream to teach and raise a family, I still took a boat out into the backwaters. As for the nation,  the Big River has been an important thread running through Americas history and my life as well.  Needless to say, I thoroughly enjoyed this fascinating retrospective of the Mississippi and its history… Old Man River...... she keeps on rollin, she don't no nothing...in song as well.:) 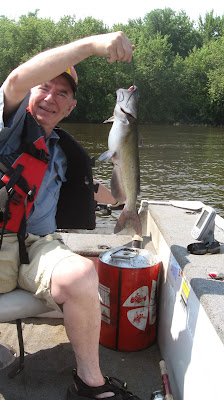 Addendum:  The really cool thing about the Mississippi as it winds its way between Minnesota and Wisconsin is you never know what your going to catch.  One this day,  I caught Mrs. T. who agreed to come along to read a book and work on her tan. And incidentally Minnesota's State Fish the delicious walleyed pike....:),to the far north in Minnesota is Lake Itasca and the origin of the Father of Waters, and much further to the north and east likely in Quebec, according to blogging friend AC of the Ac Is on is another MISSISSIPPI RIVER how neat!

Click icon for more
book review blogs
@Barrie Summy
Hang in there. And please be safe, healthy and germaphobic. Cheers! Barrie Barrie Summy Author, www.barriesummy.com
Posted by troutbirder at 6:00 AM