I Lost A Friend Recently 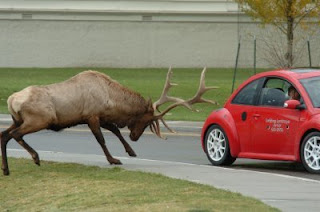 We were not really really "close" friends and you will understand why. He didn't care much for people in his face. I learned to like him though. And I mostly respected his spirit. It was the spirit of the wilderness. The spirit of independence. The spirit of an age largely gone by. He lived life to the fullest. His name was # 6.

Let me tell you how we met. I first saw him on a video from the National Park Service. It was mostly showing why it's not a good idea to to get too close to the buffalo, bear and elk in Yellowstone Park.

The elk come down from the "high country" to spend the 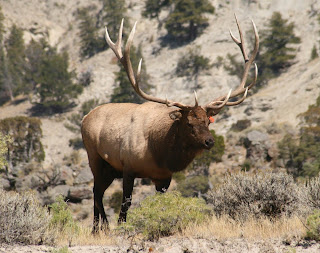 winter in the grassy park like areas of Mammoth Hot
Springs. There is a restaurant there as part of the headquarters complex. In the video, a bunch of tourists are standing on the concrete steps leading to the entrance to the restaurant. They are watching a massive elk, which is standing on the sidewalk, minding his own business. Then a tourist comes up the sidewalk, walks within a few feet of the elk and takes a flash picture right in his face. The tourists turns around and begins walking away, when the elk gives him a shot from behind. No fatality here but a nasty leg gash for the foolish tourist.

Yes, the bull elk are little testy during the rut. It's not that easy keeping track of your harem of 25 females when they tend to wander all over the area munching grass. For this "crime" the elk had his antlers removed and an identification
tag attached to his ear. It said # 6 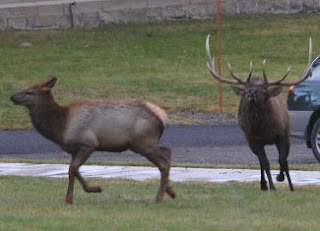 A year later, in October we, along with our friends Gary and Rosie, arrived for a brief stay in Mammoth. This time # 6 had had his antlers removed again. An "urban legend" had already sprung up about # 6 claiming that he had tipped a small red volkswagon over. It wasn't true, according to the restaurant manager. I had asked him about that, while sipping my morning coffee and reading the paper. However, he had managed to mangle the bumper of the little red car. It had stopped right next to him on the curb. "Too bad he lost his rack again," I replied, already revealing my prejudice in favor of "# 6." When I looked outside to the parade ground, there he was approaching another large elk (#10). He was going to try and win his harem back. He didn't stand a chance though as soon as the fight began. Without horns, he could only 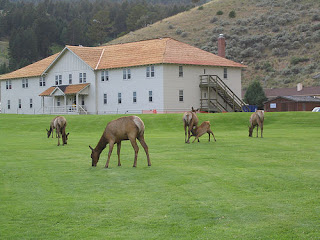 side butt with his head. The crowd watched the uneven contest. I finally had to look away. Later, that day I found him battered and resting on the
lawn beside our little cabin. We had a talk and I gave him the "life goes on" pitch. I don't know if he bought it. Perhaps, he was already plotting his comeback for the next year.

A bull elk well known to fall visitors to Mammoth Hot Springs has died as the result of a freak accident.
Photo by Ken Meyer.
The animal, known as "Number 6" due to his orange and black ear tag, was found dead Sunday night in Gardiner, Montana. Montana Fish, Wildlife, and Parks staff members believe the animal tripped while trying to cross a fence and somersaulted onto his back, where he was pinned between rocks with his antlers beneath him and suffocated.
A necropsy indicated that bull was at least 15 years old and weighed 725 pounds. Elk have an average life span of 13 to 18 years, with bulls typically topping the scales at 700 pounds. His rack, although diminished in size from previous years, still gross scored an impressive 356-5/8 on the Boone and Crockett scale. At his peak, the animal would certainly have been considered a "trophy" by elk hunters.
Several large bulls with impressive antlers venture into Mammoth Hot Springs each fall to compete for the attention of cow elk during mating season. The aggressive behavior of these animals brings with it a threat to people and property.
Number 6, and his regular sparring partner Number 10, were both ear tagged several years ago. Number 6 had his antlers removed in August 2004 and again in August 2005 in an effort to reduce the danger he posed to park visitors. Number 10 was last seen in the Mammoth Hot Springs area shortly after the rut concluded.
In the fall, a dedicated group of park staff and volunteers can be seen patrolling the Mammoth area, reminding visitors to stay at least 25 yards away from the animals. Those who fail to abide by this requirement not only put themselves in danger, they may also be subject to a citation and fine.
Park regulations require people to stay at least 25 yards away from most animals and at least 100 yards away from bears and wolves at all times. Visitors desiring a closer look at animals should use binoculars, spotting scope, or the zoom lens on their still or video camera.