So this morning I just finished Becoming by Michelle Obama. This much discussed book is likely or has already been identified as the most read or listened to autobiography/memoir of all time. Some of my former students, of this long retired history teacher would no doubt find it hard to believe, when I say, for this review I’m at a loss for words. What is there to say that won’t sound like a bunch of hackneyed clichés or overdrawn superlatives?' I'll try to choose my words carefully and with restraint.


Becoming is a book exactly about that. How a child and then a young girl grew up first in a racially diverse mostly blue-collar working-class neighborhood on the south side Chicago. Her rock-solid family was anchored by  a father who despite serious physical handicaps worked a full-time job for the city, never complained and brought laughter and fun to all those around him. Then there was her mother, who fostered in her children that with no excuses they should always strive to be the best that they could be. Incidentally, this should always include using proper grammar  Finally, there was an older brother who steadfastly protected his little sister and often paved the way for her on their mutual road to success. As we know, it is often the case that our early childhood sets the template for who we become.


Each following candid chapter reveals more and more of the becoming theme. Michelle’s high school years were marked by the effects of the white migration to the new suburbs. The south side of Chicago began to suffer the effects and trauma of poverty, crime and drugs. The self-actualization of the word "ghetto" only worsened the problems. In the mostly black high school, which Michelle attended, she was asked  "why are you so white?  Grammatically correct English was no doubt a factor there.
In succeeding chapters we meet a striving young woman who regularly asked herself she was “good enough?” Needless to say she was both while attending an elite Ivy League university and beginning work at a Chicago law firm where she  hoped someday to become “a partner.” Obviously both of these institutions were largely white and mostly male-dominated.


The next chapters becoming for Michelle involves an unlikely romance and marriage involving two people so different in their upbringing and lifestyle one can hardly imagine  how in the end it all works so well. Of course, the last becoming involves politics and the White House. Here the details are rich and compelling and  include an evolving marriage and raising two girls as normally as possible in the White House. There is some  disdain for politics  at the beginning of the stages but overall  little rancor,  Michelle’s tagline "when they go low, we go high” pretty well sums it all up what is left out in these final chapters. We saw all the lows on national television. The highs in those White House years when a special woman and her family did us all proud.
So now as I promised, without all the superlatives and clichés I could think of, I will  simply say this is the best autobiography/memoir I have ever read. And to those who for whatever reason have yet to read it I believe anyone who approaches this story with an open mind and a little empathy will find it touches the heart.

A message from my guardian angel

From my beautiful daughter-in-law, Deanne.


It seems that  my widowed daughter-in-law not only is Barbs and my guardian angel but she also has a gift for writing. The following excerpt from a recent letter she sent me gives a hint of that talent. The following take is from a list of complaints I vented to her. The best one though refers to the love and kisses I get from Barb when I arrive at memory care and the fact that she hangs on to me and won’t let go when I’m about to leave for our home.
Dearest Ray,
Even though your oak tree is dying, “Google” is monopolizing the internet, Verizon has robo customer service reps, robber-baron hospital and senior care companies have umpteen red tape hoops to jump thru, closed bank accounts unfortunately can no longer cash checks, and your energetic and vibrant wife of nearly 53 years still has the  intense hots for you, it’s good to know you  have your sense of humor intact😄...and that “Dragon” is a helpful dictator (ooh—now that’s an oxymoron!), or should I say is “helpful at dictating.”  I love that you are  a “half glass-full” kind-of guy—a realist BUT definitely an optimist 😁. 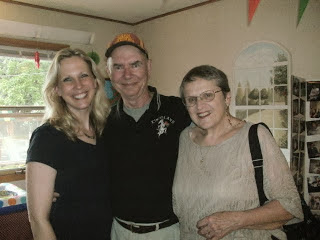 
It was a really bad day off  and I came close very close to being killed twice driving. You gotta admit that’s a bad day.  Then the crummy weather forecast we've been having here here in Minnesota for months was really bad. Again. Of course, being gone all day to visit my wife in memory care forced our first ever house dog Lily into making a mistake  or two bedroom rugs.  Other than that I was notified that the pileated woodpecker who had visited my suet feeder for the first time in several  decades visited and began taking chunks of bark off the largest oak tree.  My friend Mr. science proceeded to inform me that my  the oak tree  was, no doubt, dying because somehow the woodpecker knows that and is  chipping away  because it prefers to eat the frozen worms under the bark causing the incipient fatality instead of the usually preferred suet.  Actually that's not all that made that day ""special". Instead I'll just  mention and explain why I had a bad day driving. Perhaps I was a bit distracted though I don't text. There were  10 foot drifts and snow piles along our gravel   road which heads down a hill to a busy highway. That highway has a curve in which speeding trucks appear suddenly.  Between that and the snow  I missed a speeding semi hauling a load of gasoline by about a second. I would’ve been toast. Later, that same day after visiting my tax specialist, I headed home about 30 miles. And shortly after leaving Harmony about five semi’s approached me from the other direction. Several unsecured items flew out of one of them and I only had time to duck as they flew right at me.  With the bang I ducked, held onto the steering wheel and was literally covered with shattered glass. Of course, the semi's kept on going and while I slid into the ditch. Fortunately I was mostly uninjured, though some small embedded glass was stuck into my palms where  I had gripped the steering wheel. I think that qualifies alone on having a bad day driving.  Yup. On the  much brighter side later I talked to my bride for 20 minutes from her new  abode in memory care. She was happy, joking, glad to be in her “apartment” in  Now in retrospect it really wasn’t that  bad a day. When I finally got home I had decided a black cloud had been following me. Later speaking to my daughter-in-law Deanne over the phone she  told me it was a good day because the good Lord and the guardian angels were watching over me. On second thought it was a really good day.....:) 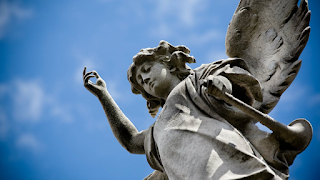 No new book review today, just a picture framed poem given to me by my friends and neighbors, Bruce and Rita H. As most of you are aware Mrs. T., My dearly beloved wife Barb, is now in memory care. I cried when I read  these words the first time, but now I think  they and might be very helpful for all those who meet friends, who are in the final stages of that horrible disease.
Alzheimer's request
Do not ask me to remember.
Don't try to make me understand,
kiss my cheek and hold my hand.

I'm confused beyond your concept,
I'm sad and sick and lost.
All I know is that I need you,
to be with me at all cost.

Do not lose your patience with me,
do not scold or curse or cry.
I can't help the way I'm acting,
I can't be different though I try.

Just remember that I need you,
that the best of me is gone.
Please don't fail to stand beside the me,
'til my life is gone.
Author not known.
Posted by Troutbirder (ray)
Posted by troutbirder at 12:06 PM 19 comments:

In 1996 modern library edition of two of Theodore Roosevelt's early books. Click on me and my friend Mark Twain in the picture above.
Posted by troutbirder at 6:23 PM No comments: