On Saturday Mornings Barb & I met friends for breakfast for years at the Gateway in Wykoff . I continue that tradition . On past Saturday John and Joanne Glady had some really good news. ANNA  their former exchange student from the Ukraine had managed to flee from Kiev the capitol with her mom, little  brother and Grandma to Czechoslovakia.  Her Dad and older brother in college remained behind to fight the Russians.  I met ANNA MANY TIMES both as a teacher in our high school and for  breakfast on Saturday mornings.  We often  TALKED  ABOUT HIGH SCHOOL EVENTS,  HER COUNTRY AND HER PLANS FOR THE FUTURE. What a sweetie she was and is. It is clear the U.S.   and the democracies of Europe will stand with Ukraine But for me now this god-awful war Russian aggression  has become personal for me. I prayed last night for ANNA and her families' safety .

Posted by troutbirder at 3:15 PM 5 comments:

BREAKING: It was just leaked that GOP candidate for MN Attorney General Doug Wardlow is planning to host a private fundraising event with Mike “The MyPillow Guy” Lindell this month.

Raymond, Mike Lindell has done more than almost any American to push Donald Trump’s Big Lie and undermine faith in American democracy. His reckless false claims about the 2020 election have even earned him a $1.3 billion defamation lawsuit. But apparently, for Republicans in 2022, that’s an asset, not a liability.

The fact that Wardlow would host a fundraising event alongside Lindell, an honest-to-goodness traitor to American democracy, should completely disqualify him from serving as Attorney General.

Before we are Republicans or Democrats, we are Americans, and the sanctity of our democracy must be above partisan politics. If you agree, pitch in right now to help us make sure Wardlow never comes anywhere near the Attorney General’s

Posted by troutbirder at 6:09 PM 4 comments:

The Big Island in Hawaii 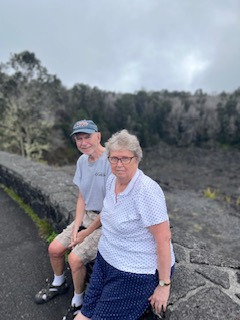 So here Prof. Jean and I are on the big Island in Hawaii  in volcanoes national Park above a crater. What fun we had! Dry sunny and warm jeans sisters home sat high above the Pacific ocean on a volcanic mountainside overlooking the city of Kona. The homes were crowded and very close but with large palm trees and other big shrubs each home seemed hidden away as if in a desert setting.

When we took a day trip to then national Park near Hilo in the North the desert turned into a jungle like appearance with lots of rain and fog and cooler temperatures. There were active volcanoes but throughout the island they didn't seem to blow their tops like Mount Saint Helens did on the mainland there a lot of leaked out the sides and in the long run the lava flows to the sea and the big Island gets bigger yet as it hardens on the land or in the ocean.

Unfortunately my camera failed me and the above picture was taken by Colleen Jean's sister.

Returning to Minnesota instead of taking American airline back to Phoenix and then on to Minneapolis-St. Paul, we took Delta to Seattle and then a Delta redeye flight to Minneapolis-St. Paul. We were late for our connection, had to wait in Seattle for another plane. Just because you're flying at night certainly proved to be not a good way to get some sleep😝

Posted by troutbirder at 9:08 AM 7 comments: