We recently returned from a short mini-vacation with our friends John and Joanne to the adjacent cities of Sault St. Marie Michigan and Ontario. There we took in the famous Sault locks and a day long train ride north into the Canadian wilderness. Hop aboard the train with us..... 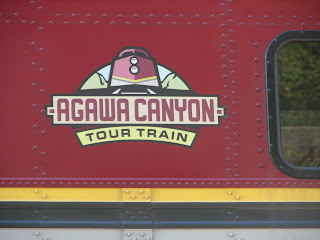 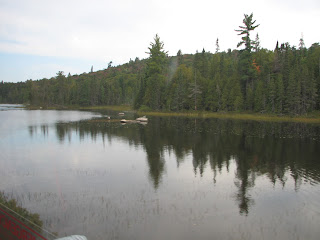 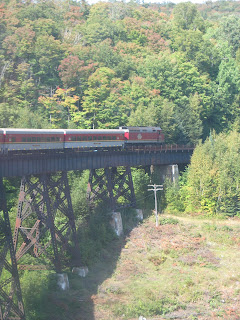 ﻿
Unfortunately, midway on the trip,  a medical emergency took place and it was several hours before an ambulance could arrive  on  one of the few roads that crossed the tracks. 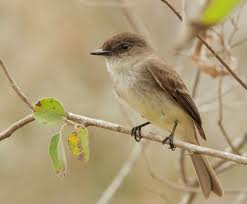 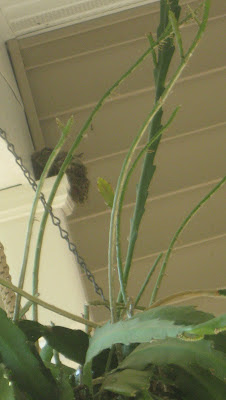 Earlier this spring I noted a new small bird checking our
front porch out. Looking for a nesting spot actually. A couple of days later
nest construction was well underway. Having had some previous experience with
messy barn swallows in the past, I was quick to inform Mrs. Spic and Span. 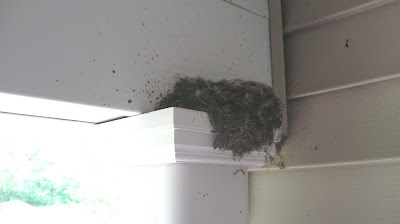 She
wasn't happy with the news. The new arrival was actually one of our most familiar
eastern flycatchers, the Eastern Phoebe. I hinted rather broadly that the bird
was likely an "endangered species", which it surely was from Mrs. T's
use of the garden hose removal method. A few weeks later I checked the nest. here were five tiny eggs smaller than a dime. Then one evening I heard some eeping and watched the parents hurrying back and forth bringing supper. I ouldn't believe how crowded the nest had become. Those five little birds were iterally piled on top of each other. 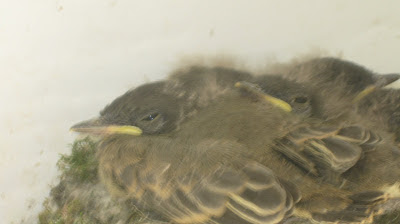 Then one day they were all gone. Bon
voyage little Phoebes. In the interest of good home front cleanliness and
spousal relations I then removed the nest. Imagine my amazement when several
weeks later I found the nest rebuilt. With the same result. Two broods successfully raised then……. Two barn swallows were noted zooming around
their perch on the power lines in front of our house. The rest is 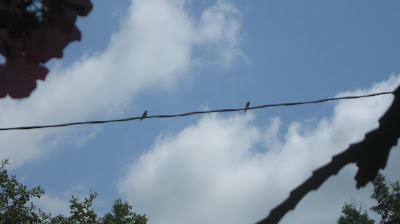 history.
They were barn swallows. And they moved right into the phoebe nest. 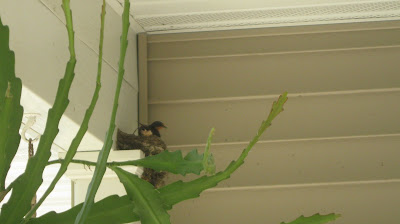 I thought immediately that it was too late in the summer. They'll never make it in time. Wrong!
Meet the barn swallow twins. After hopping around on my porch planter and railing for a few days they flew off to join their parents and hopefully live happily ever after.... :) 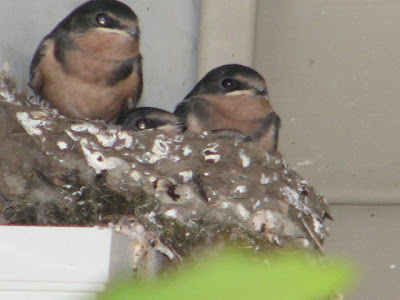 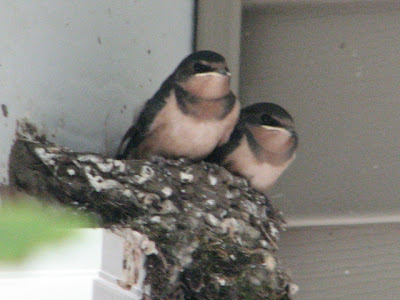 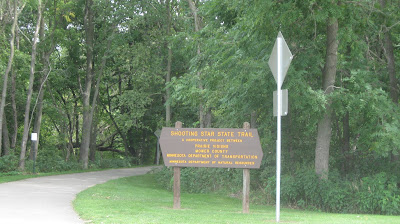 It was a nice but not too hot sunny day when we decided to bike the Shooting Star Trail which goes from Leroy to Tiopi. Mrs T likes it because it is relatively flat and I love all the prairie flowers. 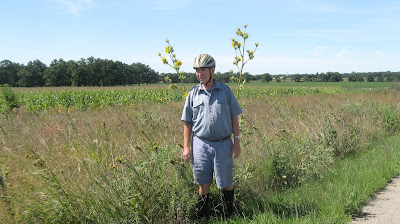 Here I'm checking out a prairie Compass Plant (a type of sunflower) whose leaves always orient north and south. That way we're sure not to get lost on the trail... just kidding.
I always stop to check out and new flowers and this one is .... ooops I'll have to get my book. 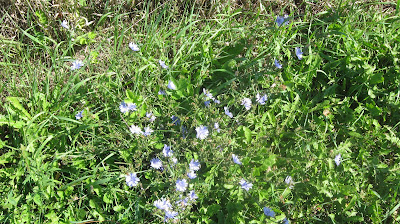 Mrs T is also a digital photographer. She likes to take flower pictures as we. She converts them to note cards for here friends as well. Here she comes after taking some pictures. 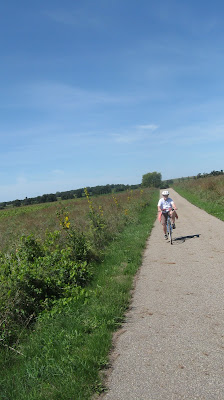 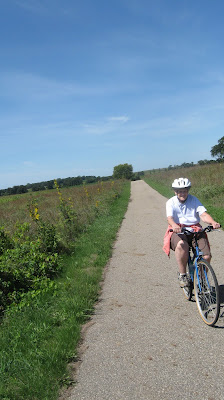 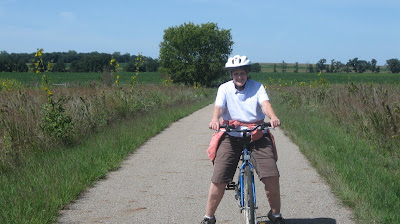 What a great way to excercise!
Posted by troutbirder at 6:07 AM 15 comments:

West Fork of the Madison 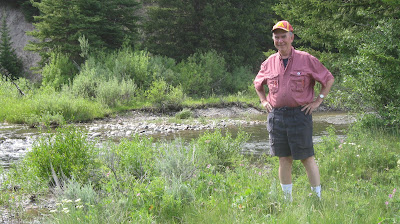 This small stream in southwestern Montana is the West Fork of the Madison River. The Madison ( a blue ribbon trout stream) is
one of the triad of rivers which form the Missouri at the famous junction in Three Forks, Montana. Some decades ago I got an invitation to join my white tail deerbow hunting brother as he went on a scouting expedition for elk in Montana’s Gravely Range. Being employed as a teacher, fall elk
hunting was not an option but a July
trip offered me the opportunity to try some flyfishing in Big Sky Country. I've had some success over the years fishing the Gallatan, Madison, Missouri, Big Hole, Jefferson, Rock Creek, Lamar, Bitterroot
and Boulder Rivers. They were all large or medium sized waters but by my small spring creek limestone southeast Minnesota standards they were too big to ever feel totally comfortable. It was the smaller headwaters and tributary streams that I liked best. And the West Fork of the Madison was the
first…. 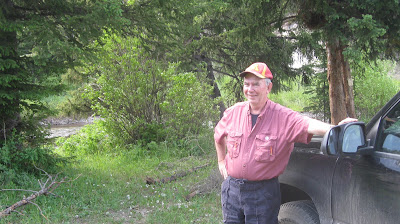 It was in this very spot with our tent pitched along side the tree behind me that I fished in Montana for the first time. My brother
and I caught rainbow, brown and cutthroat trout. They were hooked and so was I. It was in the late 70s and for the next 20 some years (later with my sons) that traveling to Montana was an annual summer rite. I suspect the fishing isn't quite as good as it was in those day. Much of thst is due to the depredation of the deadly "whirling desease" that infected these water. The brown trout were less impacted that the rainbows and cuts. Still the browns grow big and fat and the rainbows are slowly rebouding... Here our friends Gary and Rosie appear to be checking out a bend where I had regalled them with stories of giant rainbows leaping out of the water on the end of my line. 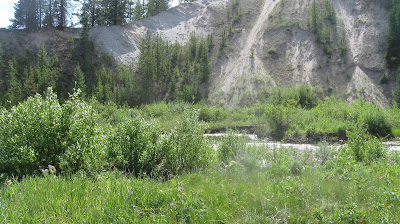 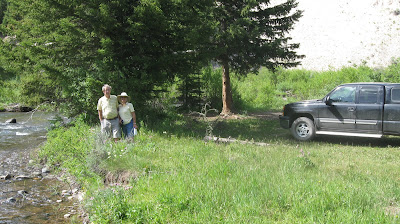 Those were the days my friends...
Posted by troutbirder at 9:52 AM 17 comments: