It was early in March 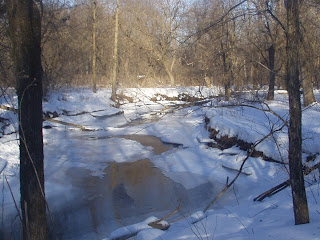 Baron the GSD & I
were following a snowmobile trail
thru the woods.
He stopped nose to the ground like my hunting dogs used to do.
The he followed a scent or some movement. 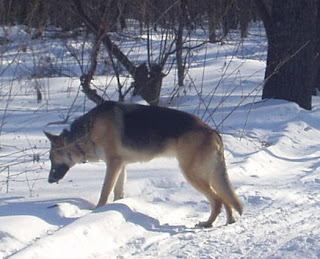 He was tracking something under the snow. 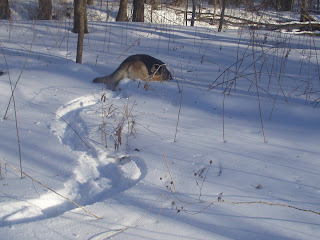 GSD's are famous as "sniffer dogs." Rooting out explosives, illicit drugs etc.
Today, we went for a "birding" hike in Lake Louise State Park. He tracked and flushed a pheasant, and then a huge turkey out of the slough. Hmmm. Maybe I should take up hunting for upland game again? Nah!

Return Of The Eagle 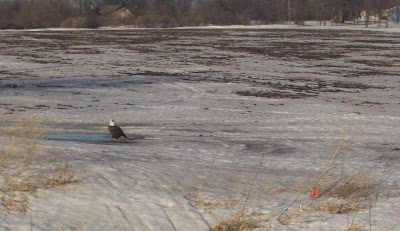 It was a sight I have waited thirty-eight years to see....a mature Bald Eagle in the field adjacent to my back yard. The eagle was sitting next to a puddle of water less than 100 yards from my door. Futher investigation showed that the melting snow had revealed a deer carcass. Voila! Chow time for our national symbol.

A short personal history of the fall and return of the Bald Eagle:
Late 1950's - I bought my first canoe for fishing trips down the beautiful St Croix river and into the BWCA. When the eagles disappeared from the St. Croix Valley, it happened in such a way we didn't really notice it at first. Their were still a few eagles in the BWCA and the Superior National Forest. Then I read Silent Spring.... and noticed.
The Clean Air and Water Act, the EPA, the banning of DDT and an Endangered Species list followed and began to turn the tide. Finally then we gradually saw them return to the St Croix. Increasing numbers were wintering in the Mississippi River Valley. And then they began to appear here in Fillmore County, about sixty miles from the Big River. I began to see more and more on my trouting days along the streams of Bluff County. Then maybe 15 years ago the first nesting was spotted here on a canoe trip down Bear Creek. Now birds are overwintering here as well.
Today there was a mighty eagle sitting confidently in the field behind my house. Wonderful! 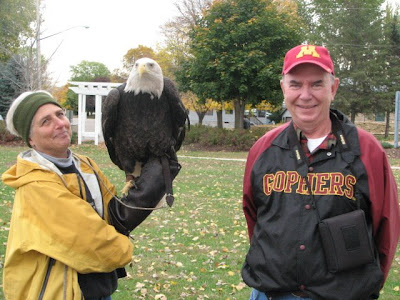 My friend Angel from the
National Eagle Center in
Wabasha Minnesota
Posted by troutbirder at 7:45 AM 21 comments:

Day Of The Eagles 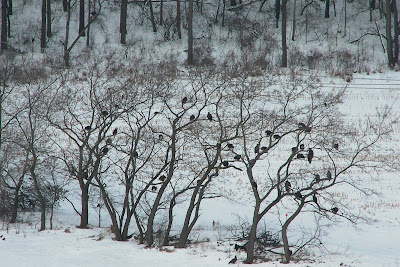 I had decided to rev up my new birding hobby by persuading my friend Mr. Science to join me at the National Eagle Center in Wabasha for the annual Golden Eagle Count. To my surprise, Golden Eagles are found wintering here in the Mississippi Valley. Unfortunately, he couldn't make it, so we decided to branch out on our own the following Friday. We stopped by the Eagle Center to get some ideas on routes to take where we might see the Goldens. There were learned that sixty Goldens had been spotted, the previous weekend, in Minn. Iowa, and Wisconsin . On to Wisconsin!!
We made a waystop near Reeds landing where we spotted six Balds and a host of the usual waterfowl including common goldeneyes and Canada geese. Then it was across the Wabasha Bridge over The Big River and south towards Alma. We turned left and headed into the coulee country east of Alma. There we spotted perhaps another half of a dozen Balds in the next couple of hours before we started thinking about lunch. "Where should we go," I asked somewhat naively. "Hey every little town in Wisconsin has at least one bar," I was informed. So there ahead in the distance appeared to be a small crossroads.
As we approached the town's outskirts, I noticed some buildings and a fence line stretching toward the east. "There's a huge flock of crows in the trees on that fence line up ahead," I pointed out . As we approached, the "crows" seemed to be growing in size.
Stopping, we got out and scanned with our binocs. They were definitely Balds and my partner began counting till he reached over fifty. It was then that I noticed what appeared to be a hog confinement building along the road ahead of us. There were also some eagles on the ground in the alfalfa field behind the buildings and adjacent to the fence.We decided to approach closer by pulling the car ahead about a hundred yards. Now we could see clearly behind the building. There were dozens of Balds on the ground, some in a literal pile, where they were swarming and jumping in the air. This reminded me of one of those African documentaries where you see vultures clambering on the dead carcass of an antelope.
We also spotted two birds on the ground somewhat separated from the others that we thought might be Goldens. In the half hour we watched this amazing sight, they never took flight, so we were unable to confirm their identity.Finally, we left drove ahead into town to find (sure enough) a bar and grill. We had lunch with a view, including watching eagles flying back and forth across the highway and roosting in a churchyard next to the bar. . Upon asking our waitress if seeing so many eagles here was a common sight, she informed us that they were "here all winter due to the chicken farm." I am sure there were at least over a hundred eagles in the immediate area. "What an amazing day!"
Posted by troutbirder at 4:59 AM 21 comments: 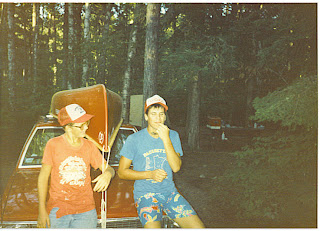 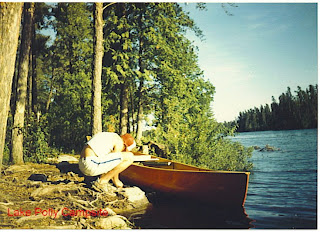 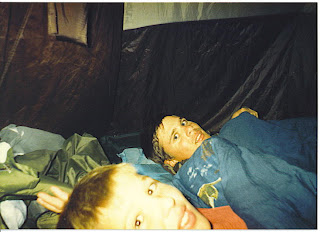 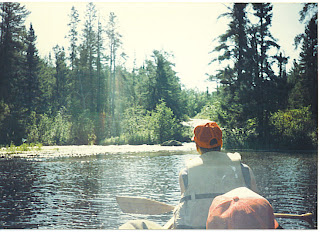 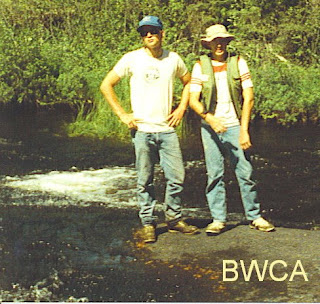 "Wilderness is more than lakes, rivers, and timber along the shores, more than fishing or just camping. It is the sense of the primeval, of space, solitude, silence and the eternal mystery." - Sigurd Olson 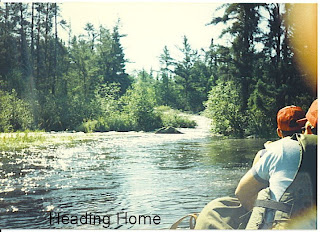 My Two Sons
My two sons are my vision of heaven and earth
Two young men of intense and immeasurable worth.
The genes of their Mother and her outlook on life
Of her she gave the best to them and also as my wife.
I would hope their experiences similar to mine
That they have their heaven on earth as I had my time.
04-07-06 Aho Speaks
Posted by troutbirder at 6:19 AM No comments: 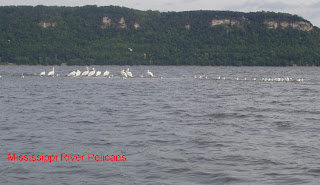 I had an interesting day yesterday. Got to meet a "top gun birder" actually. My birding mentor, Mr Science, brought one of Minnesota's birding "uber-gurus" John H. by for a "consultation." Now what would a pro like John be doing being
hitched up with a raw rookie like me?
To begin with Mr. Science was helping

John plan a Fillmore county birding tour
for the Zumbro Valley (Rochester)
Audobon Society. As a side issue, I was
to familarize John with "ebird". Ebird, for
those not attuned, is Cornel Universities
birding website and the home of the Christmas
Bird Count. I had been using it for over a year
as my "listing" repository.
I had just finished that job when I began
demonstrating a few of the birding posts on
this blog. One of them involved a line of
pelicans floating on the calm waters of
Lake Pepin. It had turned out they were
not floating but standing on a sand bar in the
middle of the lake. They had saved my
butt from crashing into the sandbar, when

racing towards it, I realized the birds were
standing, not floating.
John had been intently looking at the various
bird pictures, when suddenly he asked me
to magnify the Pelican picture. "What are
the little ones to the right," he asked.
"Some kind of seagulls," I ventured. "Draw
it up closer," he suggested. I took a stab. "Er
Ringbills?" "Yes, but not those two on the
right. Caspian terns are what they are."
Even Mr. Science was amazed.
According to the Minnesota Ornithological
Societies records John has the most birds
ever listed in Fillmore County. He is also
high on the list in many other counties in
the state. He is also approaching the top
record for the state as a whole. Given the
fact that he is also at least ten years younger
that all those ahead of him on the lifetime
Minnesota list..... well, with his great skill
and a little luck someday...
Yup, yesterday March 2, 2009, I was
fortunate to be in the presence of one of
birdings All-Stars!