It's been more than two decades since I've been there. Still, I have many fond memories of this particular campground. It's definitely one of the Top Ten on my list of favorites campgrounds. The Sam Billings Memorial Campground, is up the West Fork Rd., from Darby, Montana. It was part of a family camping fly fishing trip consisting of my brother Greg his wife Bootsy myself and Mrs. T. 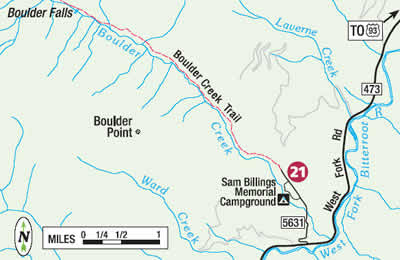 The campground can be found about a quarter of a mile off the blacktop next to Boulder Creek. That creek feeds the West Fork of the Bitterroot River. Photography was mainly by Barb 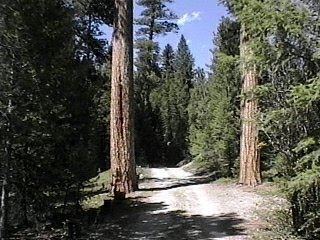 The campground is surrounded by huge Ponderous Pines. The only thing comparable, in my experience, would be the Norway Pines at the headwaters of the Mississippi River in Itasca State Park in northern Minnesota. 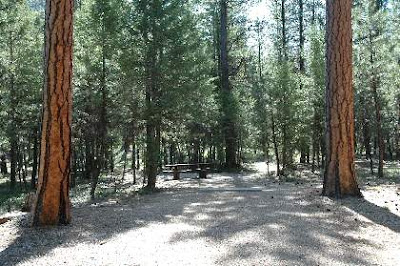 The small town of Darby sits in the beautiful Bitterroot Valley, south of Missoula and Hamilton, Montana. Its main attraction to Mrs. T is a world class ice-cream shop!Her most serious addiction. 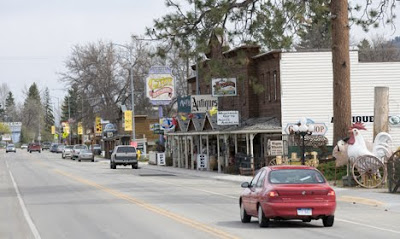 What's so special about this place that I like so much? Let me count the ways.
1. The short road into the campground is narrow and winding. This tends to discourage the riff-raff with their huge rigs. Pop-ups and small campers do just fine.
2. Potable water is not available, so you have to bring your own. Of course, a bracing dip in the creek will wash the sweat off, if you dont mind its 32&1/2 degree temperature (just kidding... sort of). And the wives naturally made the best use of it
3. Three-foot diameter Ponderosa pines are scattered in the campground. It's also worth a hike 4.5 miles up Boulder Creek trail to the falls. On that particular hike wives having heard unfounded rumors of large grizzly bears roaming the area along the trail chose to wear on their jackets a bunch of jingle bells. Naturally the husbands told them the truth that grizzly are actually not found in that area. However my brother and I had to add the fact that the area had the largest concentration of mountain lions in the lower 48 states to which we added the fact that the one thing that annoy the lions the most was, of course, jingle bells! 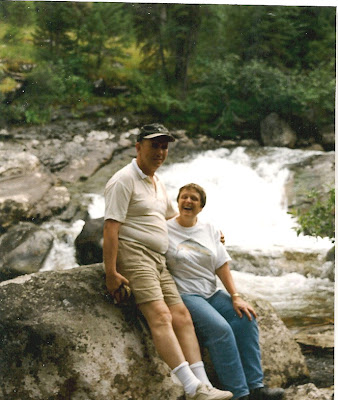 The trail gently ascends through big pines, fir and spruce with streamside understory of western yew, Oregon grape and kinnikinnick. Moose are common. Watch for pikas and marmots in talus slopes.


My first trip up to the falls, was with my brother, fly rod in hand on a several years before. It wasn't the 4 plus miles that did me in. It was the several thousand feet gain in elevation. Also, being totally out of shape didn't help either, as the above picture reveals...ugh.

On that occasion "It just around the bend," my brother kept looking back and yelling. Finally convinced, as Redd Fox used to say on Sandford and Son, "it's the Big One," well I did have some feeling chest pain, so I sat down on the trail, composed myself for the inevitable, and decided to enjoy the mountain view. Five minutes later, having taken some deep breaths, I determined instead the problem was oxygen deprivation. And more imporantly, I could hear the roar of the falls just around the next bend. 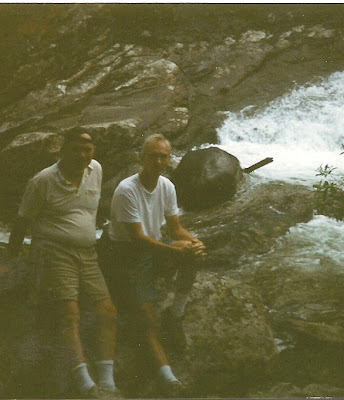 4. The trail head to the falls accomodates horse campers and backpackers for access to the Selway-Bitteroot Wilderness. It was on this trail, that I saw my first and only Great Gray Owl, sitting right above me.

5. Solitude. On most occasions, when I've been there, the campground was sparsely populated. 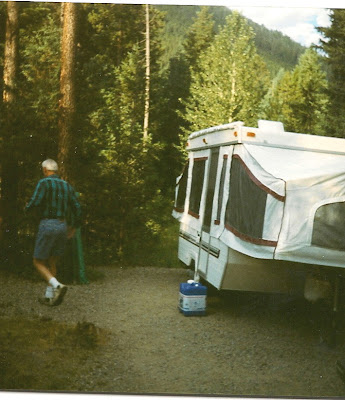 6. Wildlife. Yes, the wilderness area has the highest concentration of mountain lions in the lower forty-eight. And grizzly bears have been re-introduced. Drumming of pileated woodpeckers and scents of vanilla waft from big pines, where brown creepers nest under peeling ponderosa pine bark. Moose tracks etch the mud by the spruce-lined creek. Butterflies - blues, swallowtails, and admirals - crowd sunny openings near Boulder Creek. At night, a saw-whet owl hoots from a high limb above the campground. It doesn't get any better than all this.
7. Trout. Cuthroats and cutbows abound in the creek. Not big ones. Pan sized. Mmmm Mmmmm Good!
For bigger challenges, and catch and release, the West Fork and the Bitteroot itself , do just fine. 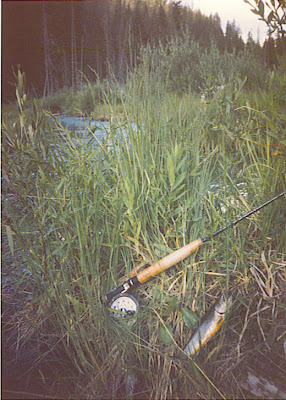 In the summer of 2000, there were a series of really bad forest fires throughout the West. One of the worst was in the Bitteroot National Forest, adjacent to and on both sides of the Bitterroot Valley. Darby, Montana became the control center for the firefighters taking on this terrible blaze.
This awesome picture was taken in the Bitterroot National Forest in Montana on August 6, 2000 by a fire behavior analyst from Fairbanks, Alaska by the name of John McColgan with a Digital camera. Since he was working while he took the picture, he cannot sell or profit from it so he should at least be recognized as the photographer of this once in a lifetime shot. .
Now all of that is passed though perhaps someday I will just return to Montana as a tourist. My vertigo and tendency to fall even on our little placid trout streams in southeastern Minnesota, has led me to give up the sport. Still the memories are there of Sam Billings one of my favorite
places in The Great American West.
Posted by troutbirder at 2:00 AM 19 comments: 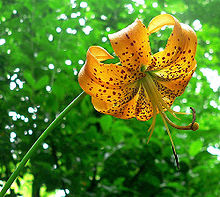 
There are lessons to be learned in just about all phases of life. History, or in this case botany, can teach that. Keeping an open mind might be one such lesson. Take the case of the elusive Turks Cap Lily. Wildflowers like birds can have "local" names. Thats why both are scientifically identified by latin names. Some time back I posted some wildflower pictures and identified one of them, found in a native prairie preserve, as a "Turks Cap Lily." Every one around here called these wildflowers Turks Caps, so I was absolutely certainly positive that's what they were. Thats why when several commenters gently informed that they were Michigan Lilies I replied that they were seriously mistaken. The ideological rigidity of todays politics come to mind doesn't it? 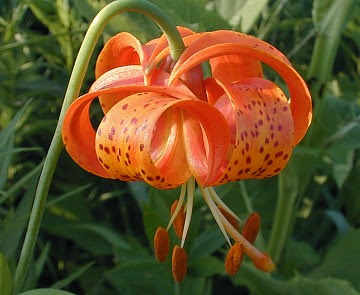 Today, I wish I could remember the names of the people I'd self righteously "corrected" by email. I'd send them a belated apology. Or maybe the title of this post might catch their eye... but I doubt it. In any case, let's all try to keep more of an open mind..... I'm working on it..... :) 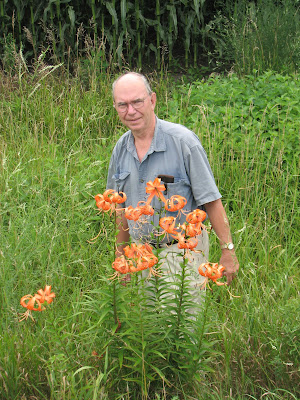 The Day Of The Eagles

I had decided to rev up my  birding hobby a few  years ago by persuading my friend Mr Science to join me at the National Eagle Center in Wabasha for the annual Golden Eagle Count. To my surprise Golden Eagles are found wintering here in the Mississippi Valley. Unfortunately, he couldn't make it on the appointed Saturday, so we decided to branch out on our own the following Friday. We stopped by the Eagle Center to get some ideas on routes to take where we might see the Golden's. There we learned that over one hundred Golden's had been spotted in Minn. Iowa, and Wisc. the previous weekend. It was on to Wisconsin!! We made a way stop near Reeds landing on the Big River, where we spotted six Balds and a host of the usual waterfowl.
Then it was across the Wabasha Bridge headed into the coulee country east of Alma Wisconsin. We spotted perhaps another half of a dozen Bald Eagles in the next couple of hours before we started thinking about lunch. "Where can we find a place to eat," I asked somewhat naively. "Hey every town in Wisconsin has at least one church and two bars bar,"  I was informed. So there ahead in the distance appeared to be a small crossroads town.

As we approached the town's outskirts I noticed some buildings and a fence line stretching toward the east. "Huge flock of crows in the trees on that fence line up ahead," I noted. As we approached the "crows" seemed to be growing in size. Stopping, we got out and scanned with out binocs. They were definitely Bald Eagles and my partner began counting till he reached over fifty. It was then that I noticed what appeared to be a hog confinement building along the road ahead of us. Also there were more eagles on the ground in the alfalfa field behind the buildings and adjacent to the fence. 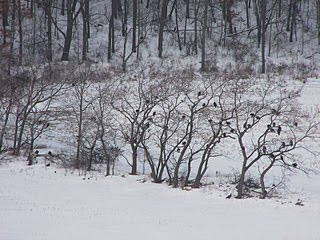 We decided to approach closer pulling the car ahead a couple hundred yards. Now we could see clearly behind the buildings. Dozens of Balds were on the ground, some in a literal pile, where they were swarming and jumping in the air. This reminded me of one of those African documentaries where you see vultures clambering on the dead carcass of an antelope.We also spotted two birds on the ground somewhat separated from the others that we thought might be Golden's. In the half hour we watched this amazing sight, they never took flight, so we were unable to confirm their identity.
Finally, we drove into town to find (sure enough) a bar and grill. We had lunch with a view, including watching eagles flying back and forth across the highway and roosting on a Catholic church adjacent to the bar. Upon asking our waitress if seeing so many eagles was a common sight, she informed us that they were "here all winter due to the chicken farm." She said they flew in each day "by the hundreds from the Mississippi River," which was about ten miles to the west as the crow or should I say in this case the eagle flies. What an amazing day!!!! Apparently dead chickens were thrown out into the fields for the Eagles 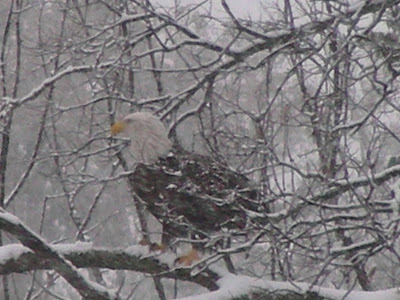 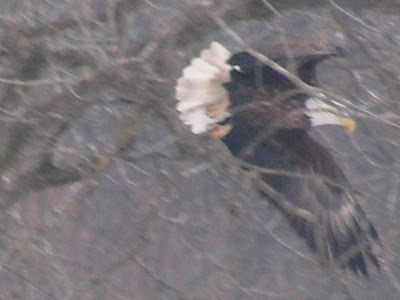 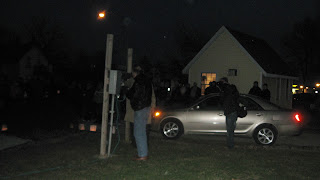 Even though my little point and shoot camera wasn’t up to the job, the recent Love Lights A Tree ceremony in Spring Valley was very impressive. As a crowd of friends and supporters watched, our friend Steve did the job of honorary tree lighter on the giant tree next to the tourist information center.  A large number of named luminaries surrounded the tree and were labeled with the names of people lost, survivors and currently battling cancer.
As a two time cancer survivor (cervical and breast) Mrs. T had a candle in her honor and as well as many for Steve who is currently taking on pancreatic. Here is Steve and wife Jewel along with the Troutbirders Ray and Barb having a sidewalk lunch a few years ago in the port city of St. Malo, Brittany France. Those were the days my friends…. 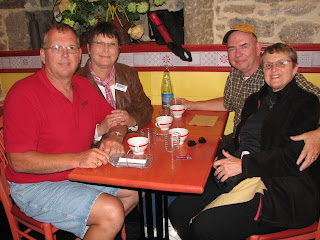