Killing Rommel and saving a bird

The Long Range Desert Group was a real British commando unit of World War II.
The LRDG fought against Rommel and the Afrika Korps in the North Africa campaign of 1940-1943. They drove unarmored Chevrolet trucks, in which they carried everything they needed—petrol, ammo, food, fuel, spare parts—to strike hundreds of miles in the rear of the German forces, crossing deserts and “sand seas” that not even the native tribesmen dared venture into.

Killing Rommel is the story of one fictional mission (though others like it took place in real life), an attempt to infiltrate the Afrika Korps in the field and eliminate its invincible general.

Books have a way of becoming more, and different, than you think they will when you start to read them. Killing Rommel became more about its narrator, a fictional British lieutenant named Chapman, than about the raid itself. Chapman’s story was about the kind of fighter we don’t have any more—like Capt. Miller (Tom Hanks) in Saving Private Ryan– the citizen-soldier who takes up arms reluctantly and wishes only for the day when he can lay them down in peace but who proves, under fire, to be the equal and even the superior of troops and officers who have trained their whole lives for war.


Yes, I was totally drawn into this story and you might enjoy how it happened 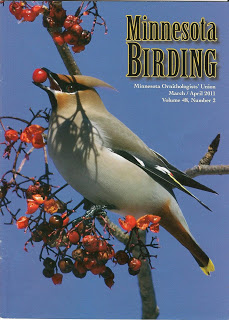 "Recently, the new editors of the Minnesota Ornithological Unions, Minnesota Birding magazine asked their members to submit "Real Stories of Minnesota Birders." So I did. It was a post from Sept 23, 2008 titled "Bird Rescue." Imagine my surprise when reading the March/April, 2011 issue of the magazine I came across a story titled "Baron to the Rescue." While somewhat abbreviated from the original, I recognized the hero dog immediately. Here's the original post......


I was sitting in my reading chair in the living room, deep into Steven Pressfield’s new novel, "Killing Rommel." The LRDG (Long Range Desert Group) was about to set out on their desperate mission, as new 8th army commander Bernard Law Montgomery was attempting to hold the line against Afrika Korps, less than 80 miles from Alexandria. There was the thump of heavy artillery and ooops... it was something that just hit the window. I rushed outside to find Baron (my GSD) mouthing a tiny bird. "Drop it," I ordered. Like a good soldier he complied.

I picked up the tiny creature stunned but still alive (barely). Walking into the garage I found a rag and placed it and then the bird into an empty beer cooler. With a cat in the house and a curious dog that followed my every move, I determined the safest temporary refuge for the bird was to place it into a empty  cooler.Heading back into the house, I found my trusty Peterson birding book and began searching for an identification. Probably a warbler I thought. I had narrowed it down to several LBJ’s but nothing conclusive. I decided to wait an hour or so and then check to see if the bird was still alive. I took the cooler out into the garden and carefully opened the lid. The bird had previously been laying on its side barely breathing. Now to my utter astonishment, it was sitting perfectly upright with a "I just woke up and where in the heck am I" look about him. I took several pictures. Here he is looking at me in mutual astonishment. 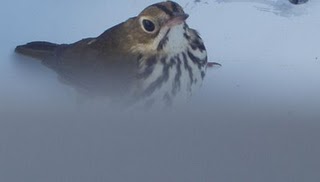 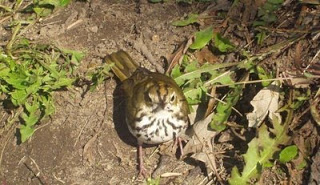 Then he tried to fly but kept crashing into the side of the cooler. I carefully picked him up and set him on the ground. We looked at each other for a few seconds . I took another picture.


Then he just flew away into the woods. When I downloaded the digital pictures I saw the conclusive proof. He had pink legs. It was an ovenbird. The first one I had ever seen....."
Later,  I received a comment about my post from a lady who belongs to a group who during there morning walks in downtown Rochester, Minnesota, counts and sometimes rehabs birds who have crashed into the windows of tall buildings.  The most numerous victims tend to be ovenbirds, who being a "woodsy" species tend to be unfamiliar with the dangers of big city life.

I’ve  done a lot of  story telling. That began in the classroom and particularly  in the latter years and  a two hour combined history/English class called Humanities with my teaching partner Fran. Then when we both moved to the middle school hoping to do something similar I was able to trash the typically awful history textbooks and we focused on blending in reading  stories, mostly historical fiction. So here's my story for today, it's titled THE TRIBE OF MARAUDING POSSUMS.


Just finishing Caesar's the Gallic wars, the English version, I realized that the first sentence pretty much covered it all. I came, I saw, I conquered. Little did I realize that my former student and now cleaning lady, Stacy Lex Tart would involve me in a tribal war as well. She had turned the vacuum cleaner off as the canister was filled with our German Shepherds dog hair. Also known as a G. S. D. According to my wife, those initials stood for German Shedding Dog. Stacy was telling me about a very elderly friend of hers, who lived in a trailer home but had been sleeping for weeks with Stacy and her husband. Why is that? I asked. It was because a bunch of opossums had invaded her trailer home home, especially at night destroying things in her kitchen and even building a nest in her bathtub. Needless to say she was very frightened. I urged Stacy to investigate the problem further and if she found where they were hiding out they would be easy to dispatch. Meaning they’d be playing possum and easy to whack over the head with a baseball bat or something similar.  Looking very appalled it turned out my former student was a pacifist at heart.


It became quickly apparent that having put my pheasant and goose hunting days behind me was not sufficient enough excuse for avoiding the job. I was trapped.  And being trapped reminded me that my dairy farmer friend Steve had given me a spare live trap he had used to eliminate some raccoons tearing up feed bags in his barn.  Perfect!


Thus the next morning Sir Ramond du Lancelot ventured forth to rescue the elderly fair maiden in her small castle. Leaving Princess Stacy to arm the device with cat food  our intrepid hero we outside to look for signs of the intruders. Aha! A trail led to a den in a wood pile and from there to the dryer vent into the castle. A patch of screen was used to secure the entryway. The culprits were either trapped inside or kept out.


Afterword:  The next morning Stacy reported one tropped and released followed by two more.  Neighbors began showing up and wanting to borrow my trap. Apparantely they were common throughout the area. I suggested that the bird feeders were the likely attraction.  Eventually I got my trap back….