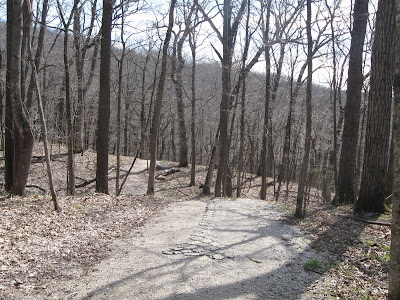 We went up. Then we went down. Then back up again. It was all for a spring wildflower and birding hike at Forestville State Park. It's unglaciated Bluff Country here, with hills and steep ravines, above the beautiful Root River Valley. It's also a favorite trout fishing destination for me but not today, as I'm carrying my point and shoot camera. I followed Baron up and down the trail. 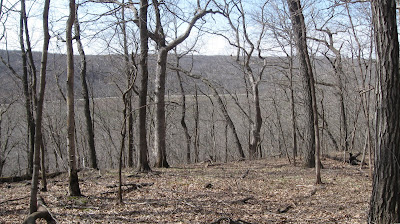 From the "fisherman's parking lot," we crossed the freshly burned prairie on the way to the hills and then began a long climb up to the south ridge. Our DNR burns prairie land in state parks, every couple of years, to rejuvenate things and keep them from being overrun by scrub trees. There was a spring & rivulet coming down the ravine and a foundation in the woods. It apparently was the remains of an old distillery, circa the Civil War era. Ghosts in these woods, I believe. 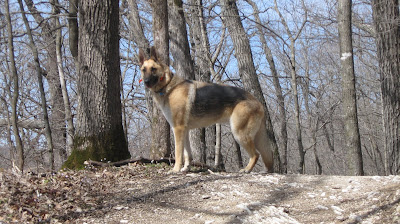 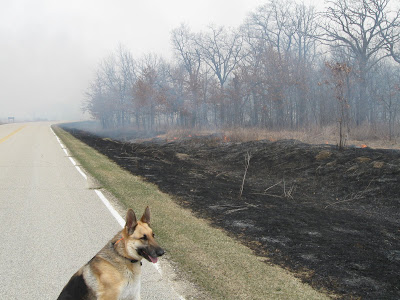 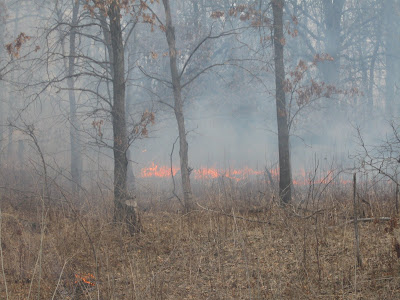 The long trail up the ravine leads eventually to the horse camp. Not wishing to go there, I checked my map and turned east along a new trail to me called the "Fern Loop." It inititally followed below an east/west ridgeline yet was still high above the valley floor. It just might be the place to see those first spring wildflowers..... Sure enough it was. The hillside above and below me was covered with thousands of hepatica.
Searching for the first wildflowers of the year is one of the highlights of early spring. In eastern North America, one of the most delightful early blooming species is hepatica (Hepatica nobilis). Its bright blue, white, or pink flowers warm the hearts of all who see them, as they shimmer in the rays of sunshine that reaches the forest floor thru the branches of the leafless trees of earliest springtime. 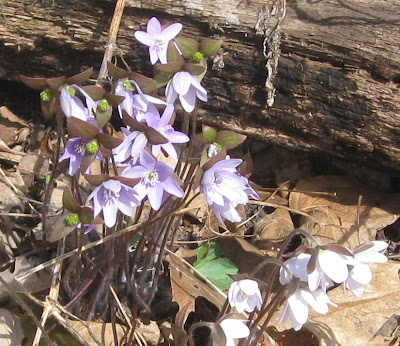 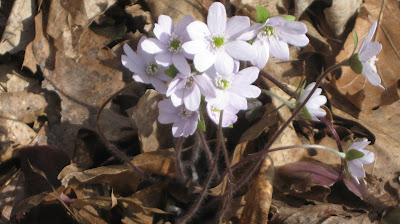 The hillsides have many "seeps". Not exactly springs but where a trickle of water keeps the ground wet and soggy. This is the favorite habitat of skunk cabbage and marsh marigolds. They are also early spring wildflowers. 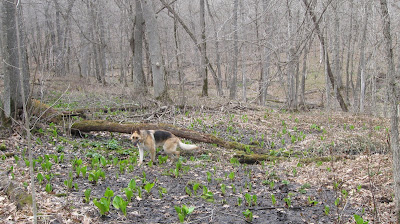 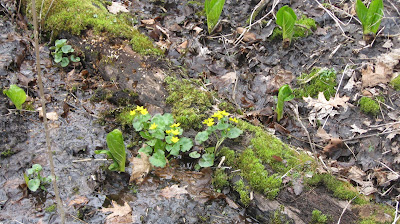 The woods is also coming alive with the spring migrants. I see lots of Hermit Thrushes, and few Ruby Crowned Kinglets and Eastern Phoebes. They all move too quickly and far away though for my point and shoot so I stick with photography the cooperative wildflowers. Baron seems to have learned though when my binoculars are up, its time to stop and wait for me to catch up. I'm always watching for movement in the woods. On one occasion, as we came down into a small creek bed, I caught some movement in a woodpile up ahead. Half hidden it peered intently at me as stared back. "That's one big coyote," was my first thought. I've always been skeptical of most wolves being reported this far south in Minnesota. "Get your camera out dummy," & I did. I motioned Baron to my side, not wanting him to chase anything so big and wary looking. 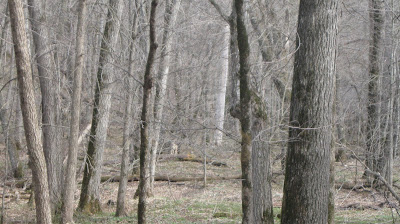 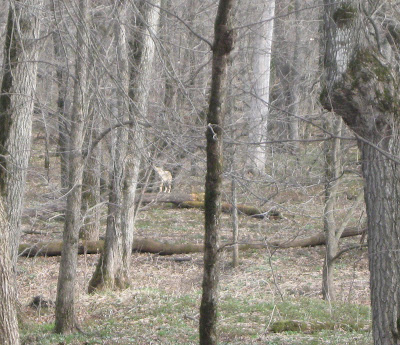 It was the wrong color for a gray wolf but still acted very wild. Some people foolishly raise wolf/dog hybrids but he disappeared into the brush so I'll never know....
Baron and I continued on our way having been on the trail for over three hours. He often would stop and wait for me as if to say "come on boss you're slowing down." Another half hour and we were back to the truck. Well, I've got quite a few years on him at that. In any case, we'll both sleep soundly tonight 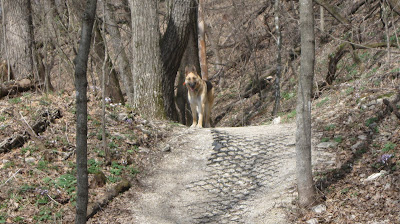 Posted by troutbirder at 4:59 AM