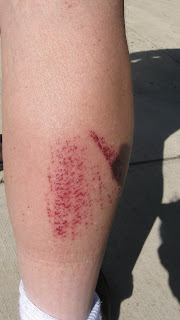 Case 213 Location - Somwhere between Harmony and Preston in Bluff Country. Trauma - Contusions on the back of Mr. Troutbirders right leg. The victim was later treated by authorized medical personnel. He was released from care with non life threatening injuries. Photograph by Mrs. Troutbirder. 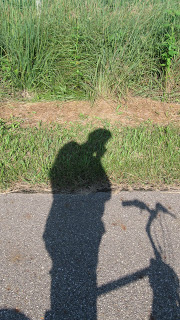 Mr. Troutbirder reported going down a moderately steep hill at safe speed when he began to slow down to stop and photograph a Lepidoptera Avuncular Halitosis. He somehow managed to remain upright in spite of being struck from behind by an inattentive biker . Stopping safely he raced back to find the inattentive biker laying prone on the pathway. Somewhat incoherent the perpetrator was mostly worried about locating his cellphone. Fortunately,  I had mine in my pocket and called for  medical help  not far away.

The idiocy of tailgating while texting is obvious but I must say besides that when I first began biking some years ago now, when someone came up behind you to pass, they always beeped or said something akin to "on your right" or  "passing" etc. to warn you.  Not anymore. Its very rare. The lack of courtesy and common decency today is becoming appalling in many avenues of life. This was just a little one....:(
Posted by troutbirder at 9:30 AM