I did love hunting. As a young teacher even squirrels were, I thought, worthy game.That is till my bride declared she would have nothing to do with cooking or eating, what she described as "skinned rats." So much for that pastime. Still,one of my favorite all time squirrel hunting episodes involved a teaching collegue. Lets say, for the sake of clarity here, his name is Don. Now Don was a North Dakotan, which means he had a rather dry sense of humor. Don and I were squirrel hunting some years ago. We had seen a squirrel go up a tree in front of us near the bank of a small river. As we circled the tree time and again we could not see the squirrel. Don offered this advice, "I will sit on this side-hill and you circle the tree to the other side. I think he just circles the tree as we do." It sounded like a good plan. 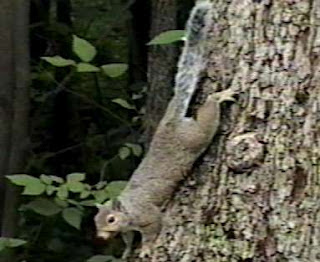 As I circled the tree to the other side, gazing up at the tree, I saw nothing. I decided to back up to get a better view. While backing up, I completely forgot that the river was right behind me. Much to my dismay I fell backwards, down a ten foot drop and into the swifty moving current. I struggled to keep my head above the water as I was being washed downstream. Drowning seemed a real possibility but I had one thing in my favor. Don was a member of the Fire Dept. He was trained to rescue others! Still heading downstream I could neither see nor hear him. Gasping from the cold water, I finally spotted some tree roots protruding from the bank ahead. As I went by, I grabbed on. Fortunately I held on tightly and proceeded to pull myself up the muddy, steep embankment. I crawled out, exhausted, and looked for Don. He hadn't moved from his sitting position. As I walked toward him cold and soaking wet from my ordeal, he simply commented in a dead pan voice, "I really doubt that squirrel is in the tree, because if he was, he would have fell out laughing." 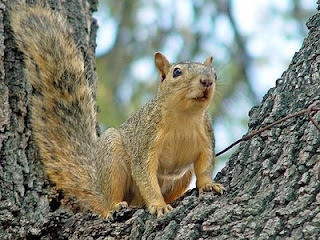 Posted by troutbirder at 8:39 AM