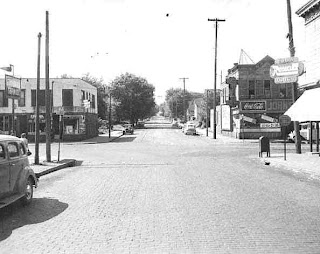 The year was 1948. We're at the intersection of Hudson Road and Earl Street on the East Side of St. Paul, Minnesota. One block behind the photographer, who is facing south, is the apartment where my parents and I lived during World War II. In 1946 we had moved upstairs into my grandparents house,  which lay about 7 blocks straight
south on the bluff high above the Mississippi River. The Hudson Road proceeded east less than a quarter mile where it reached the edge of the city, then  turning into U.S. Highway #12 as it went on to, naturally, Hudson, Wisc.  To the right in the photo was a Rexall Drugstore and Johnson Bros. grocery. In the mid fifties that grocery store was rebuilt a little further east as a "supermarket" and provided me my first job when I was in high school. 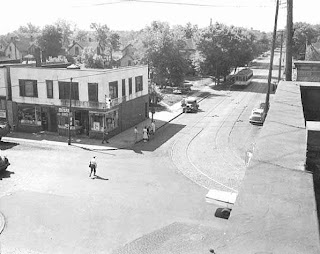 I'm not sure what this building was on the southeast corner of the intersection.  I do remember though riding the streetcar line into downtown St. Paul.  After several years living with my grandparents we moved to a brand new house on Point Douglas Road about 5 blocks east of this intersection.  At a rather young age I was allowed to take the streetcar downtown to the big public library. You can see it coming down the track heading onto the turn west on Hudson  At the downtown library  I would meet my Aunt Pearl who worked at the First National Bank and  always took me to Bridgemans for a malt before we headed headed home to the Daytons Bluff on the streetcar. I forgot to mention that around the corner from the drugstore lay two of my favorite places, Bastas bakery where I became addicted to Bismarks mygrandpa brought meand the Mound theater where Saturday matinees for a dime were a big attraction. 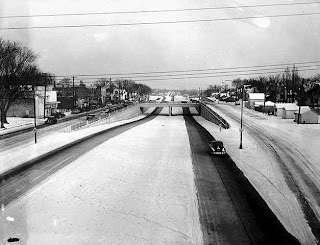 And then it all changed. Everything.  Hudson Road became a four lane divided highway U.S. #12 cutting through the east side.  Eventually it became part of the Eisenhower Interstate highway system.  Half of the cozy little neighborhood  commecial area was demolished.  It's on the left with the movie theater in the foreground as you face east towards Chicago and points beyond. Our new house was over that first dip in the distance. 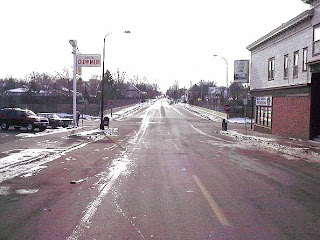 Here is a much more recent view of the same intersection.  I hardly recognize the city and neighborhood I grew up in anymore.  The road, now freeway,  still heads east from this point thru mile after mile of suburbs and over 3 million plus people who now live in the metropolitan Twin City area.  We've lived for almost 50 years one hundred miles to the south in rural Minnesota where Mrs T and I taught school and raised a family. We both grew up in St. Paul and have fond memories of those days long ago before the freeways made suburbia possible and changed everything.....

Posted by troutbirder at 5:00 AM