The Battle Of Gettysburg was "scheduled" for three o'clock in the afternoon but we arrived at Wasioja early in the morning.  While there were stores to shop in, speeches, music and authors to talk to, I most enjoy meeting and talking with the reenactors who are always in character. Come on along a take a look.... 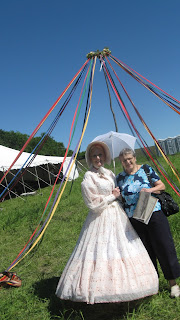 Mrs. T. stopped to visit with a friendly neighbor lady 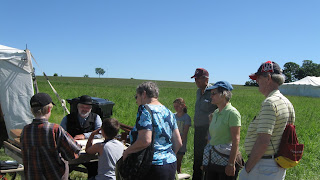 Friends Gary and Rosie (on the right) joined a discussion with another local citizen. 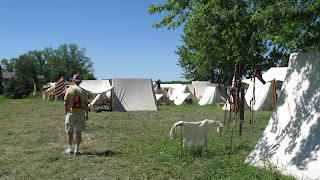 Gary led the way up a hill to an encampment where things were just stirring. 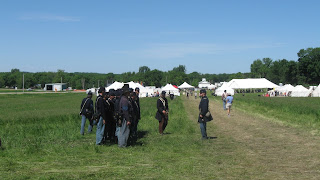 A few of the "boys in blue" from the second Minnesota Volunteer Regiment, Company C (Wasioja) were just starting to gather. 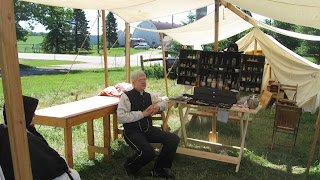 I talked to a pharmacist who was just checking his supplies. 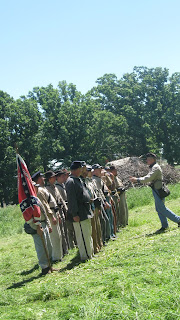 In another section of woods some rebels from South Carolina (the Pee Dee regiment) were up and about. They were confident they would be able to push the "damn Yankees" off the nearby ridge. 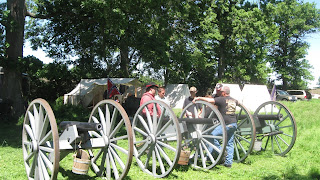 I talked to artillery men from both sides of the battle.  Here are pictured some of the Confederate guns.  Later, I met the men of a battery from New Ulm,  Minnesota.  They managed to put me in my place when I had said that I had visited their town many times and was highly enamored (being of German heritage) of their famous Schells beer. "So why are you wearing that Wisconsin beer hat, they asked.  Yes, I'd  forgotten I was wearing my Leinenkugels topper, recently purchased on a trip to Chippewa Falls, Wisconsin and its fine brewery. I must say were proud of their unit as well as their town beer!

Posted by troutbirder at 6:49 AM