The yellow ladyslipper is the most common wild orchid in the U.S. and is found in almost every state. There are 3 accepted varieties of Yellow Lady's Slipper, 2 of which are found in Minnesota: Greater Yellow Lady's Slipper (var. pubescens) and Small Yellow Lady's Slipper (var. makasin). Despite their wide range, they are threatened or endangered in many states. Habitat loss and public destruction are the main causes.
Recently, Mrs. T along with our friends Gary and Rosie visited a State preserve in Northeastern Iowa. There we saw what I can only describe as the most amazing appearance of a native wildflower I have ever seen in my life. There were literally thousands of these rare gems within sight..... 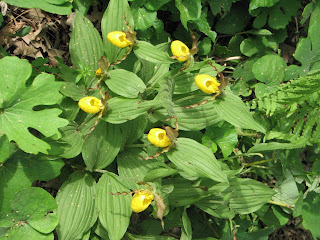 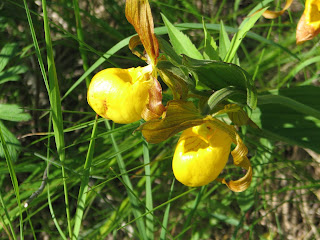 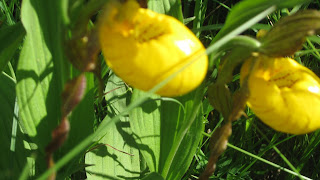 A bad idea, besides being illegal, is to dig native orchids up and try to transplant them to your own landscape.  They rarely survive. Here Karl Ruser  explains why.....
"Why don't you sell the Minnesota State Flower?!!!!", is a very common question. We really don't like to disappoint our customers, really we don't! But, we just don't feel that the Showy Lady Slipper and the other native orchids are suitable plants for the landscape.

First of all, they cannot be sustainably produced in a commercial sense. It takes 12-15 years for a plant to reach flowering age. That would mean we could only have raised two generations - at best - in the whole time Landscape Alternatives has been in business!

Second, they are very picky as to site conditions. For the most part, orchids grow where most other plants cannot. This is usually in soils with very low fertility. Believe it or not, almost any otherwise suitable landscape setting has far too many nutrients available for the plants to survive for more than just a few years.

Third, each orchid species requires a very special fungus to associate with it in a complex cycle. A native lady slipper seed must be in contact with some of this fungus when it germinates. The fungus provides the energy and nutrients the young orchid needs to grow. Eventually, the orchid develops enough so that its own leaves and roots can sustain it. At this point the role of fed and feeder switch. The fungus partially grows into the orchid plant and is sustained by it for the rest of the orchid's life. When the orchid finally is able to produce seed, the fungus is already there and ready to once again take on its supportive role for any new germinating plants. Without this natural association neither the fungus or an orchid patch will survive for long.

The only way an orchid can get this fungus into itself is for it to be there during germination. If it is introduced later in the orchid's life it will not be taken up. There are tissue cultured native orchids that can be found for sale. Unfortunately, the methods used to culture the plants cannot also include a fungus or any other microbial growth. The medium that the seed is germinated on takes the place of the fungus - while the plant is young. However, once the plant is removed from culture and potted up it is too late for the fungus to be introduced. Therefore, while such a plant may reach maturity in your garden, its seeds will never have the opportunity to naturally spread and develop into a self sustaining orchid patch in your garden. The plant you buy is the plant you get. That is not the Landscape Alternatives' way. We strive to help our customers develop self-sustaining native plantings in their gardens. The opportunity for re-seeding is an integral part of native plant gardening!


Please support efforts to protect natural remnant populations of our native orchids. DO NOT DIG THEM FROM THE WILD! From time to time "rescued" plants from construction projects become available for sale. Again, while these plants may grow in your garden for a few years, all the problems in 1-3 above will still apply. It is far better to make sure that these plants are not disturbed in the first place or, at the least, are transplanted to sites with active native remnant populations of the orchid (and thus the fungus).

Posted by troutbirder at 6:37 AM