The Forest History Center is  located in Grand Rapids, MN.  The center focuses on displaying the historical and cultural impact that out forests have had on people and the community. Historically, logging was a large economic driver, presently there is a large use of Minnesota forests for recreational purposes. The center allows visitors to see this changing relationship through exhibits, films, tours, historical reenactments, and other educational and recreational programs. It is one of 26 sites operated by the Minnesota Historical Society. We are most familiar with the site at Forestville which is only a few miles from our home in southeastern (Bluff Country) Minnesota.
The museum was great but the highlight of our visit was  the recreated logging camp where  the blacksmith, saw filer, bull cook, clerk and lumberjacks were all in character and hard at work.  We saw  draft horses demonstrate feats of strength during cross-hauling and jammer shows as lumberjacks load logs onto skids. Unfortunately we "witnessed" a serious accident during this dangerous work.  All enacted with appropriate seriousness and inappropriate hilarity.   Take a look!
Mrs. T. eyes up a golf cart for a ride down to the logging camp. I suggest it's only a block away down hill and besides golf carts hadn't been invented yet in the early 1890's.... 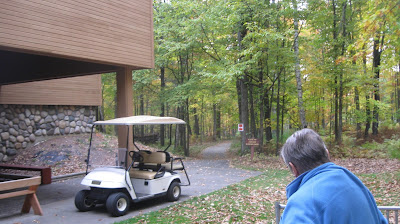 We walk down the hill following the crowd. 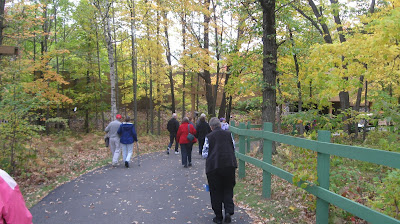 The first log building of the camp and then around the bend at
first shouting and then a SCREAM! 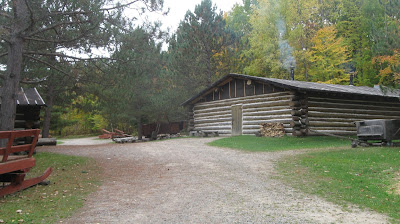 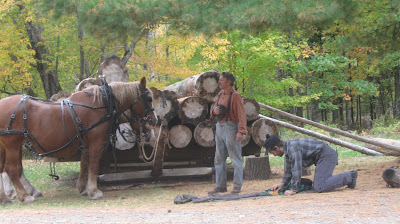 OMG! As they were loading those huge logs on the skid, one came off
and crushed a young man "flatter than a pancake.! 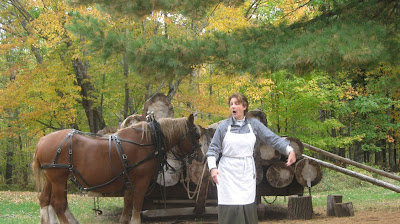 Cookie, who feeds over 60 hungry men three meals a day, was as shocked as anyone. Later,  I had a chance to ask here if these kinds of accidents happened frequently. "No," she said , but it is dangerous work and well....
On a more positive note the Belgian work horses were both handsome and very strong. Two remain working in the camp and more than twenty were out with the logging crews, we were told. 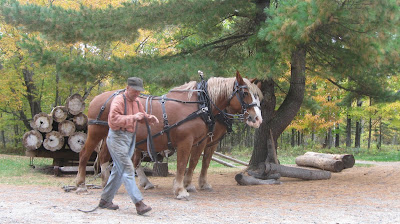 Later, Mrs. T. gets up close and personal. 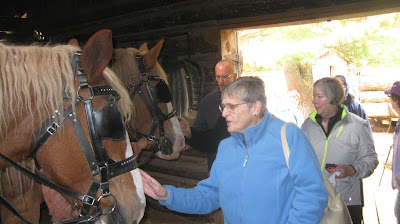 And the visit concludes with music and a chat a logger who just happened to have a guitar. 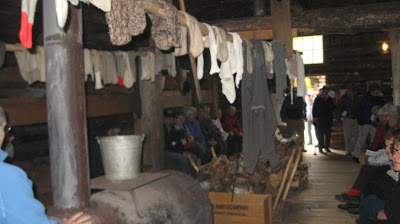 Yes it smelled in the "bunkhouse" with 30 men's underwear but the music was sweet....:) 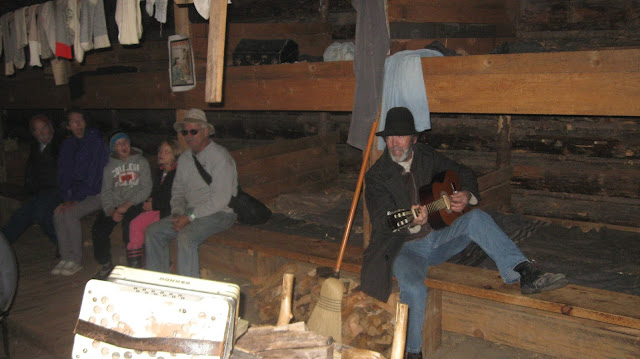 What fun!
Posted by troutbirder at 5:10 PM