Mrs. T And The Bears: 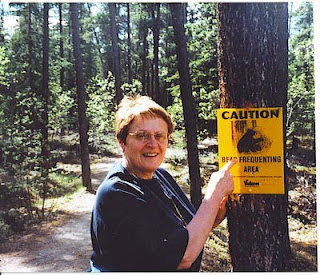 Some years ago a thousand miles from home in Minnesota and fifty miles south of Big Timber, Montana, on a rutted gravel road we’d been headed south toward a beautiful Forest Service campground. It was the last one before the road ended in the Beartooth /Absaroka range north of Yellowstone National Park. The Boulder River is a prime trout-fishing destination. That was my goal. Then we spotted a red sign. "There are grizzly bears here?", Mrs. T queried. "Yes dear, but I will protect you," I replied. "I wanna go back home," she asserted firmly. 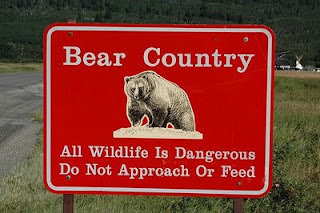 Near Darby, Montana, in the beautiful Bitterroot Range, at the Sam Billings Campground, we were just about ready to hike up a trail to the falls. "Are you sure there are no grizzly bears in these mountains?" "Yes, dear. There is a big controversy about bringing them back here, but it hasn’t happened yet, "  I informed her. "Well, Lucille (my sister in law) and I are going to wear bells just in case. To warn them off !" My brother smiled, and then I couldn’t help myself. "Err... I read there are a lot of mountain lions here though and tinkle bells really tick them off." "Whatever you jerk!" 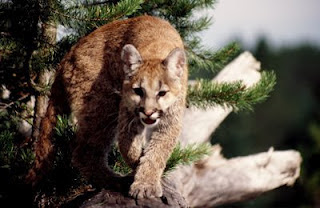 A couple of years later we were about to launch our canoes from the landing, at Sawbill Campground, into the Boundary Waters Canoe Wilderness, for a week long trip along with our two teenage sons. It was at the landing where we encountered a returning couple. with a terrorized woman who informed Mrs T. that a black bear had eaten all their food. Then "we" decided to spend the week at the public campground instead of in the wilderness among the marauding bears….
Clearly this woman is deathly afraid of bears. Right? Wrong! It all depends on the circumstances. Camera in hand a magical transformation takes place... she suddenly becomes the wild bear paparazzi woman.


We are on a back road in Grand Teton National Park with my brother and sister-in-law. My brother is driving. As we come around a bend in the road he stops suddenly. There is an abandoned car blocking the road with the front door left open. I have seen this act before. Looking out into the woods I see  some guy stalking a grizzly bear.  Almost immediately I hear our rear door slam and my timid spouse, camera in hand, begins  following the idiot who abandoned his car in the road. "Come back," I yell from the road. "This could be dangerous" My brother later asked for copies of her shots of the apparently oblivious grizzly. 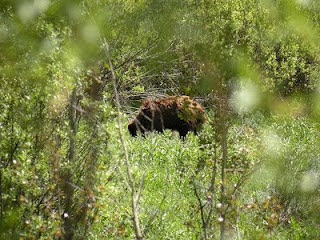 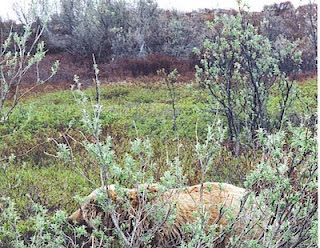 Ten years ago in Alaska, she rolled down the car window and leaned out, camera in hand. I suggested somewhat facetiously, "why don't you reach out and pet him dear. He certainly looks friendly enough." Fortunately, Mr. Bear ignored her.... 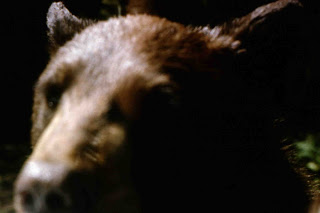 Some, with flyrod in hand, are willing to take risks in search of Montana trout. I've seen more than a few paw marks along some streams. 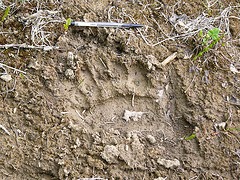 Others, camera at the ready, look for the perfect shot. This is how it was among the Troutbirders. 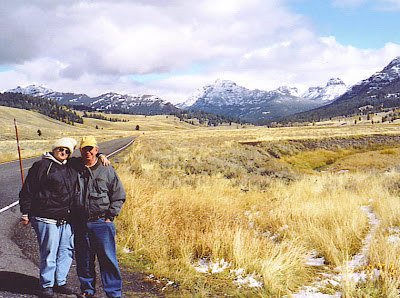 Posted by troutbirder at 7:10 PM