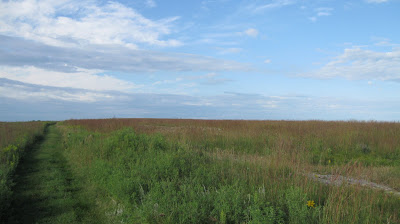 This vista of Blue Mounds State Park prairie provides you with an idea of what southwest Minnesota might have looked like hundreds of years ago. In 1836 George Catlin, making his way to the Pipestone Quarry described the scene. "There is not a tree or bush to be seen. The grass at our feet changes to blue in the distance like the blue vastness of the ocean. Man feels here, the thrilling sensation of unlimited freedom."


Blue Mounds State Park, located four miles north of Luverne, is one of the largest prairie parks in Minnesota. The park's approximately 1,500 acres of prairie preserves a wide array of rare and common plants and wildlife. A bison herd grazes peacefully on a portion of this prairie. Most of the park's prairie sits atop a massive outcrop of rock known as Sioux quartzite. The rock outcrop slopes gently up from the surrounding countryside but terminates abruptly in a spectacular cliff line. The cliff, one and one-half miles long and at some points 90 feet in height, provides a panoramic view of the countryside and is also used by a number of rock climbers from throughout the Midwest. Miles of hiking and cross country skiing trails take you along the cliffs, around the park's two lakes, into the oak woods, and through the prairie. Here you can experience tall grasses and colorful wildflowers swaying in the wind or witness the power and color of a summer prairie thunderstorm rolling in from the west. 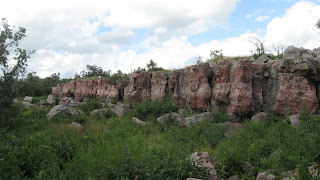 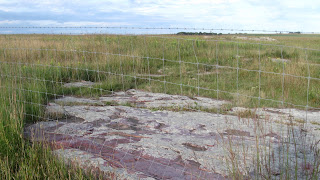 There were outcroppings of rock everywhere, providing evidence of the thin soil on this elevated area. The fence contains the buffalo herd, while to the south and west farmsteads and cornfields stretch to the horizon. Prairie plants like golden rod pop up along the trail outside the fence. 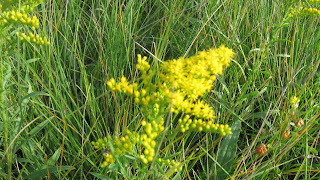 Recent rains have left the occasional puddle and surprisingly I spot some killdeer and a lone lesser yellowlegs. 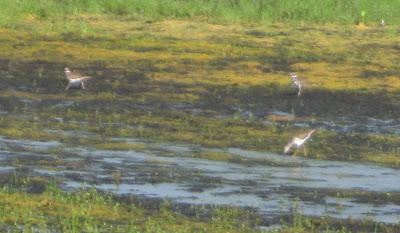 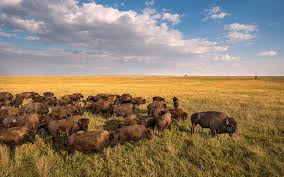 We camped in this neat park several times over the years.
Posted by troutbirder at 5:00 PM