Well, dear fellow bloggers, it seems as though my prediction that icy cold Minnesota weather and my vertigo would limit my nature photography and blogging. Thus Troutbirder has ventured into more personal domains and even the occasional rant. Today I present cats and dogs. A somewhat controversial subject. 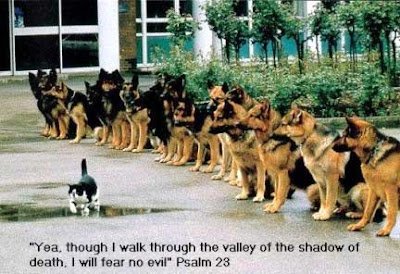 As the picture shows dogs are well disciplined by their masters. Cats on the other hand are either brave or foolish in the face of a potential enemy. Also wildly independent.
I begin by noting Mrs. T and I had a beloved house cat for 18 years named Simba. Previous to that two other cats named Tiger and a black cat named after a black revolutionary.  Unfortunately, both were run over by a neighbor on the road behind our house chasing endangered birds. We also had four hunting dogs and two German shepherds, Baron and now Lily. 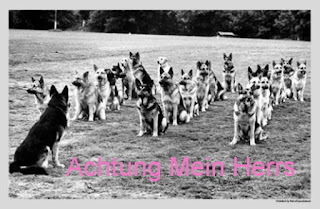 As this picture indicates German Shepard dogs and other breeds can be organized into teams. As individual they would have a much more difficult time and often can't survive without humans. But working as a team they can be dangerous predators killing large animals like deer.

It seems a librarian and I disagreed about the merits of dogs and cats. She would relentlessly prove the superiority of cats over dogs in hundreds of ways. A typical example was that dogs had Masters. Cats had staff. My response to that was the fact that dogs were domesticated somewhat earlier than cats. Thus cats were closer in their behavior to the wild. Cats for example are great and skillful predators. Killing mice in a useful manner and endangered birds to the detriment of that species.
Our experience with giant Baron and Simba was relatively peaceful. They often slept in the same room and basically tolerated each other. When Simba was sitting on the sofa or a chair she would whack him with her paws. He tended than to go someplace else to lay down. And the other hand when Simba jumped down to the floor Baron began his herding/chasing act so Simba would jump up to higher ground so she could take a defensive position. They never got To a cat/dog fight. :-)


Dogs are much less predatory except when in packs. So as the cat advocate continued to educate me on the superior merits of felines, I finally retaliated. It seems likely I pointed out that in case I was walking in the woods and died of a heart attack, my loyal dog would lick me trying to save me. After that proved fruitless he would likely remain at my side for a long period of time guarding my body. On the other hand, in the same circumstance involving you and your cat I would give your beloved cat a maximum of an hour before it would start eating you. In that manner, unfortunately, I rested my case. 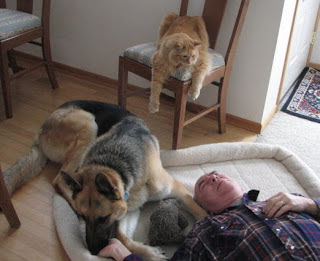