A lone eagle flew over our house yesterday. It’s not uncommon anymore as they have expanded their range inland from the Mississippi in recent decades. Each sighting though reminds me of a friend.
Her name is Angel. 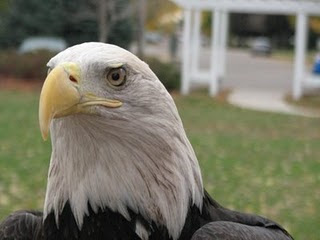 She was injured badly and taken care of at the Raptor Center in the Twin Now she lives at the National Eagle Center along the Mississippi in Wabasha Minn. Four other eagles also live there. 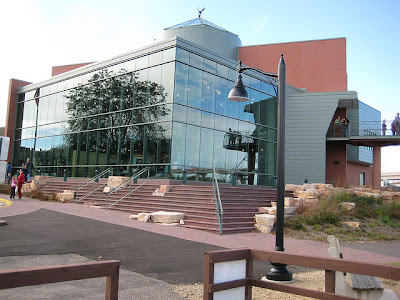 Volunteer friends come and take Angel for outings along the river in City Park.There she gets to go splashing in the shallow water along the rivers edge. She loves it 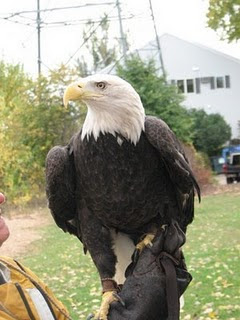 Because of the severity of her injury Angel can't fly anymore. Sometimes, though, her wild cousins land in the trees in the park to visit her. Everyone gets excited when this happens. 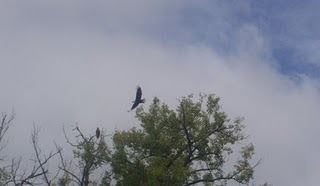 There are many more eagles now along the river corridor. Being territorial, as river niches are filling, some are moving to nest far inland.Hundreds gather here, in winter, near a chicken farm, when fish are less available. They get the leftovers. 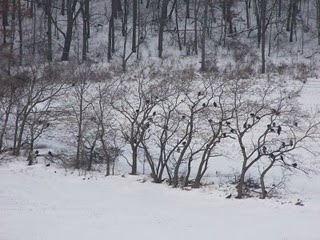 Thousands of people get to see Angel at the Eagle Center. She is a great ambassador for her kind.We were lucky enough to meet her, "up close and personal" during her and our outing in the park. It was one of the best picnics we ever had. Then we had to go home. So did she. What a magnificent creature! 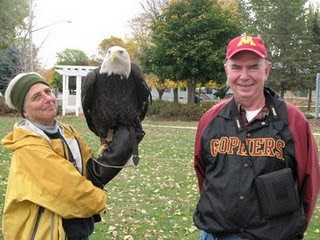