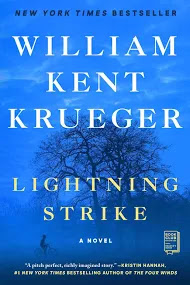 I've ben on a mystery/thriller kick of late and often chose between Minnesota authors  John Sanford and William Kent Krueger. Nothing like being familiar with the scene of the crime for a Minnesota reader like me to relate :) Krueger gets the the nod this time with his 2021published novel Lightning Strike .

In “Lightning Strike,” Krueger follows the  beautifully descriptive writing of his stand-alone books in a Cork O’Connor prequel that is both a series mystery and an independent book. Krueger begin with an authors note about the Indian relocation Act of l956. This law promising training and job to reservation Indians if they moved to urban areas. It was the final straw to the historical legacy of wars , broken treaties and promises, schools separating children from parents . Relocating to alien and unfriendly urban areas while closing and defunding reservation's helped destroy Indian communities and cultures.

With this background Lightning Strike is a beautifully told story, of a small town in the 1960s rocked by a mysterious death and culture clashes, and a boy’s coming of age. That small town is Aurora-Hoyt Lakes close unto one of my favorite  canoeing/fishing places in the world -Minnesota's fabled BWCAW the Boundary Water Canoe Area Wilderness. This region  includes the Iron Range and Lake Superior .

book is set in July and August 1963. Twelve-year-old Cork is in the middle summer, vacation' Howev  when, he and a buddy canoeing in the wildernew discover  the body of Big John Manydeeds, a well-known personality in the town of Aurora and the Ojibwa reservation. They find the corpse hanging at Lightning Strike, an abandoned logging camp that is considered to be cursed. The discovery deeply affects Cork.. Big John was the uncle of one of Cork’s best friends, and he admired and learned much from the man. Liam O'Conner  Corks father is the sheriff. The O'Conner's are mostly Irish but not entirely with Liam's grandmother being Ojibwa . This is a wonderful coming of age story as well father and son facing the divide  that a clash of cultures can bring to a family.... Another great story by Kent Krueger.