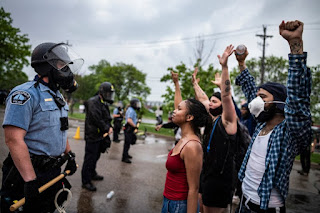 Well it seems my two favorite Minnesota best-selling mystery writers have finally crossed paths on the issue of migrants crossing southern American borders illegally. First some years ago William Kent Krueger wrote about that controversial issue in… Sulfur Springs ………... and more recently there is a introductory letty Davenport novel titled the investigator. By John Sanford

This time around Sanford wrote a spinoff series featuring Lucas Davenport's adopted daughter, Letty. She's been working for Senator Christopher Colles (R-Florida) but is getting bored and resigns. As the chairman of the Homeland Security and Government Affairs Office, Colles decides to enlist her as an investigator for the Homeland Inspector Inspector General and sends her to Texas, along with DHS agent John Kaiser, to look into the suspicion that crude oil thefts in Texas may be a fundraising effort on the part of far right militia groups solve so-called border problem in a manner far more violent manner than building the wall that Mexico would pay for according to one of Trump lying fantasies.

As a long time fan of all of Sanford's protagonist be they detectives Lucas Davenport, Virgil flowers, Letty various phase is a chip off the old block of all of them. Sanford's writing is always well plotted, funny and sharp sometimes over the top in like William Kent Krueger he can draw you into the character often so you'll wonder whether he or she the protagonists will even survive. Of course all of his characters show up and most of his stories even if only briefly but once addicted as I have been it's almost as if they have become family yes talk between cops and their kind is often gritty and even profane but but it seems very real and like me you may stay up far too late at night to see how it all turns out in the end