Mrs. T was actually my wife Barb but in the blogging world on the  Internet I was Troutbirder which actually identified two of my hobbies. I had met Barb in a small town in southeastern Minnesota where she was already teaching. The guy I had replaced to teach senior social studies And history was married  with a flock of kids so Barb  not being the bashful type was told by all the single female teachers to talk to the superintendent and make sure the Next teacher of senior social studies was single. That turned out to be me. I was a well-known and in thee community for several years as having been requisitioned for the job by Barb. it turned out to be a perfect match since we both grew up in St. Paul and eventually decided on weekends when we went home to drive together. She also  that first year came up to my room telling me that another social studies teacher wouldn't loan her a filmstrip projector and she wanted I said I sure do and here it is for you to use. Actually I don't think I ever got it back but that afternoon she also mentioned that if I didn't that there was a high school basketball game piting our school against Chatfield and I said I knew nothing about it and didn't even know where Chatfield was. What ensued was our first date and as they say the rest was history we got married a year later. 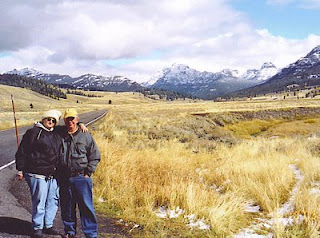 57 years of live adventurous travel over Followed  I coached basketball Barb wasNot into sports much except when our boys played I encouraged her to join me in golf , tennis even bowling no way even ping-pong the way you do it at all these games she said and I responded it's  not about winning or losing it's about being together and playing nope but then she made up for it With a simple thing. we began with a tent and eventually ended uup with a camper but she loved camping all over the country even all the way to Alaska and loved the campfire and  meeting new people, doing photography, she   took the majority of all the pictures I posted for Troutbirder. There were occasional problems such as a thunderstorm which brought trees down and in Hey campground and flooded the our tent. She and the kids abandon the tent and slept in the car. And then there was the time in glacier national park where we got to the campground late and there was only one spot left. we got the tent up in the dark.  that morning after we got up we walked around the tent to see if there were any tree limbs Down and there were along with the huge metal Cage trap that was baited for grizzly bears!!! Barb thought "We all could've been killed. Any campground in the  dark she was terrified of bears as a matter of fact it 2:00 AM in the middle of the night I was often recruited to make sure she could get to the campground Toilet safely with a flashlight watching out for bears. But put a camera in her hand and it was like when Clark Kent took off his shirt and became Superman.

We were touring the Teton national Park in Wyoming area on the back road in the middle of nowhere and there was a part of
a car house blocking the road with the door open. I had encountered that experience before in our town when there was a citywide garage sale. Looking about carefully I saw a guy walking through the tall grass to the left sort of half leaning forward and looking again noted that  there was a very large grizzly bears doing about the same thing as the guy was with his camera leaning forward and walking slowly through the tall grass the back door slammed and Mrs. T camera in hand was moving quickly to catch up and follow the guy with the camera my brother and I juumped out of the car and both fields stop to no avail this is T was using selective hearing at this point okay I'll admit it I didn't rush out afterword for a rescue maneuver. It looked worse when the bear reached ace small wooded area he kept going my wife afraid of the deep dark woods stopped turned around and came back someplace in this computer and a vast file of bare pictures of all kinds is one of the rear end of a very large bear going into the woods. It's listed in the file as Teton bear and Mrs. T showing some common sense. 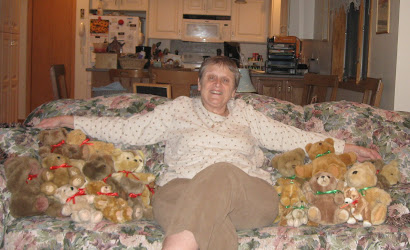 And then she invited a bunch of bears into our home. Actually there were a few of the many different Christmas presents for young kids' might not get any acording toThe county anyway Mrs. T was both fearless and foolish when it came to wild animals and her camera. somehow she survived for this activity for years her specialty however was not bears but alligators. in Florida particularly the ones that were somewhat curled up they\ could straighten out instantaneously and their jaws would go from being 10 feet away from my wife to about 2 feet those days were when I unfortunately developed a heart condition probably do to a number of vessel Scares when my fear Quota  grew over the top. I saw  kinderrgarten class once As the teachers had them all walking tied together with a rope I could  and should I'd done that myself with my wife And her
camera in the wild but when she came to me she was again  Fearless 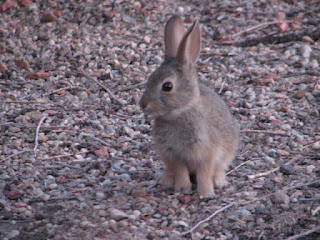 I bravely took this picture

Posted by troutbirder at 1:44 PM