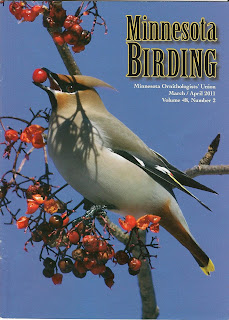 Recently, the new editors of the Minnesota Ornithological Unions, Minnesota Birding magazine asked their members to submit "Real Stories of Minnesota Birders." So I did. It was a post from Sept 23, 2008 titled "Bird Rescue." Imagine my surprise when reading the March/April, 2011 issue of the magazine I came across a story titled "Baron to the Rescue." While somewhat abbreviated from the original, I recognized the hero dog immediately. Here's the original story......

I was sitting in my reading chair in the living room, deep into Steven Pressfield’s new novel, "Killing Rommel." The LRDG (Long Range Desert Group) was about to set out on their desperate mission, as new 8th army commander Bernard Law Montgomery was attempting to hold the line against Afrika Korps, less than 80 miles from Alexandria. There was the thump of heavy artillery and ooops... it was something that just hit the window. I rushed outside to find Baron (my GSD) mouthing a tiny bird. "Drop it," I ordered. Like a good soldier he complied. 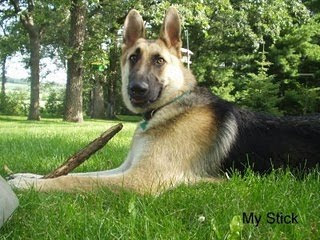 I picked up the tiny creature stunned but still alive (barely). Walking into the garage I found a rag and placed it and then the bird into an empty ice cream pail. With a cat in the house and a curious dog that followed my every move, I determined the safest temporary refuge for the bird was to place the bucket into a empty Coleman cooler.Heading back into the house I found my trusty Peterson birding book and began searching for an identification. Probably a warbler I thought. I had narrowed it down to several LBJ’s but nothing conclusive. I decided to wait an hour or so and then check to see if the bird was still alive. I took the cooler out into the garden and carefully opened the lid. The bird had previously been laying on its side barely breathing. Now to my utter astonishment, it was sitting perfectly upright with a "I just woke up and where in the heck am I" look about him. I took several pictures. 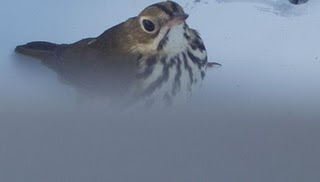 Here he is in the cooler looking at me in mutual astonishment.

Then he tried to fly but kept crashing into the side of the cooler. I carefully picked him up and set him on the ground. We looked at each other for a few seconds . I took another picture. 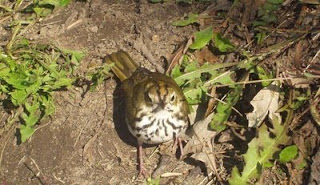 Then he just flew away into the woods.

When I downloaded the digital pictures I saw the conclusive proof. He had pink legs. It was an ovenbird. The first one I had ever seen.....
Posted by troutbirder at 4:21 AM