Long ago, I had to give up downhill and cross country skiing. Later, since my knee replacement, I've been supercautious about walking on ice. Wouldn't want to wreck that new knee by twisting and falling. Sub zero temps are not a favorite either. Still, when the temps rise into the twenties or warmer and the wind has died down, the urge overtakes. This is especially true when the "big guy" starts acting especially restless. "Go for a walk?" I'll say. And he springs to life. Tuesday we headed to Forestville.
Deep as the snow is we're not dumb. On weekends, the snowmobile trails are a racetrack. During the week....not so much. They are hardpacked and easy to walk. We headed up the Canfield Creek trail. It's about a two hour hike but we had to shorten that a bit. Near the end the trail crosses a trout stream. The water would be about two feet deep at the horse crossing. For a winter hiker that's not an option. 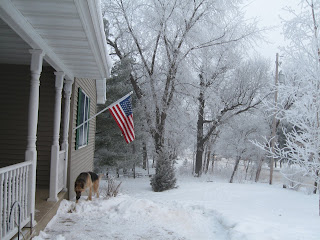 Come on along. It's a fun hike.
Baron waits patiently by the front porch. He knows we're heading out. 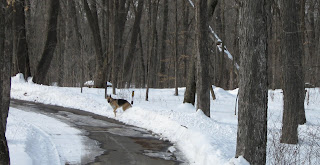 The ranger station is closed. The campground is empty, although winter camping is allowed. No people equals no leash. Yes we break the park rules. We park in the fisherman parking lot. The blacktop road is open and clear. 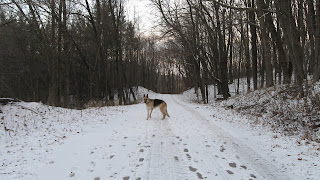 The gravel road down to the trail is somewhat icy. One of us is careful as we head down the hill to the stream. Suprisingly, I spot a puff of smoke beyond the trees and encounter a young man in the middle of the stream flyfishing. I guess smoking a cigar, flyrod in hand, never occured to me. Winter fishing is allowed here. It's "catch and release" only. He says the water is warmer than the air. We trade a few winter fishing stories. Mine included fishing the Lamar river in Yellowstone in mid October. Dang near froze my fingers into permanent immobility that time. I'm quite sure it was the last time I had any enthusiasm for winter fishing. 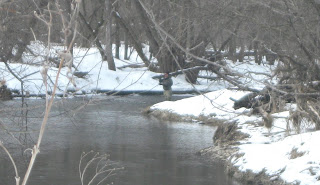 Can you see him standing just at the bend in the creek. 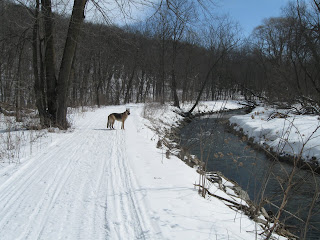 "Come Baron, don't get too far ahead." 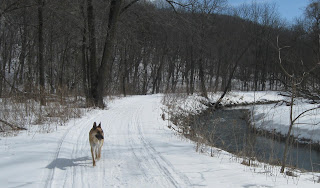 "Good boy. " Baron wears a red shock collar. The woods are full of deer and chasing them is a serious no-no. It's not needed today, as the big boy has learned his lesson from past "youthful indiscretions." 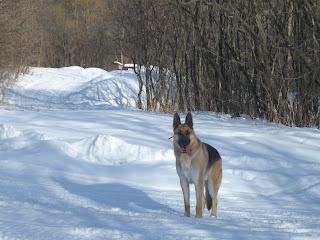 Returning to the truck we head on home. Somewhat tired, both of us will sleep well tonight. Perhaps, dreaming of balmier days, when we can sit among the wild geraniums and say "life is good. " 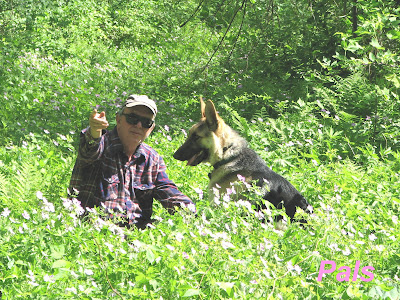 Posted by troutbirder at 5:12 AM