With the crummy weather this spring the biking got a late start. The first two outings were lots of fun though and quite the contrast. An offer to join John & Joanne’s eldest daughter Janelle and family was too good to pass up. Getting ready for "all aboard" the gang is getting ready for Carl to tow baby downhill 10 miles to Lanesboro. 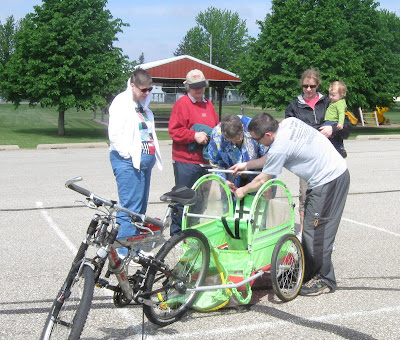 Starting at Fountain all you have to do is push off and coast about halfway there. Thats why I like this kind of run for starting out in the spring. The people passing you in the opposite direction are mostly young, some bearded, wearing tight spandex outfits and all with a very determined look on their faces. Oh and the fact is they are all going faster up the steep hill than I feel safe coasting down it. 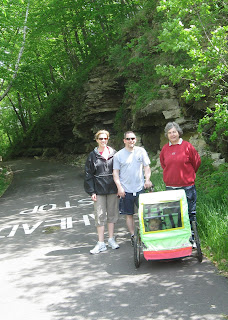 My next ride, a week later, was a whole different ball game. Mrs. T dropped me off at the burgeoning town of Tiopi (population under 50). Here I would head 12 miles east to LeRoy State Park against a 25 mile an hour headwind. It felt like I was pedaling uphill all the way. The trail was basically flat and open to the wind. My strategy was basically "slow and steady wins the race." In other words, I just hoped to meet my spouse at the park without having to call her on the cell phone to come and rescue me from total exhaustion. It worked....... 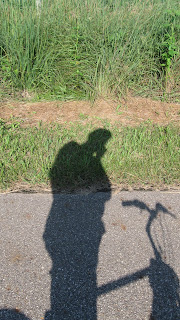 Follow the shadow and he'll show you the route. 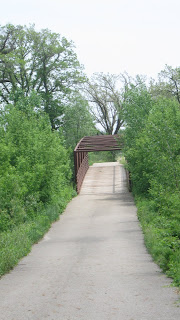 The trail basically was an old railroad bed. Thus some brush and trees on either side sheltered me slightly from the wind. 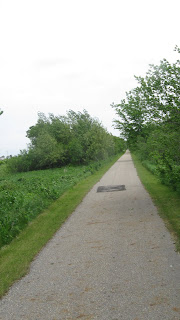 The track was mostly straight as an arrow. It seemed a long way to my destination. 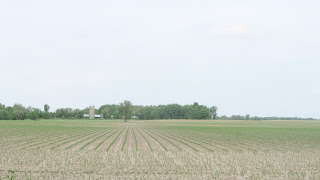 In the distance, on either side of the trail, I could see farmsteads and the emerging corn trailing off into the distance. 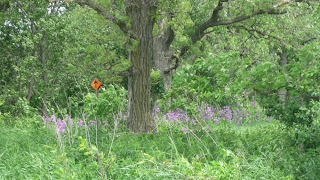 This trail is known as the Shooting Star Trail. In the late summer and fall, it is a surrounded by an amazing variety of native prairie plants, all abloom. In late spring, I didn't expect to see much but kept my eyes open nevertheless. Sure enough some dames rockets appeared around a bend beneath a small grove of oak trees. Later I spied the brilliant orange of some pucoons. 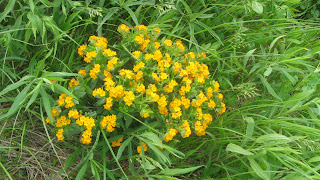 I was also keeping watch for birds but here I expected the high winds to keep them hunkered down. I did manage though to spot some dickcissels along the way. Somehow they always seem to look like miniature meadowlarks. But can they sing! 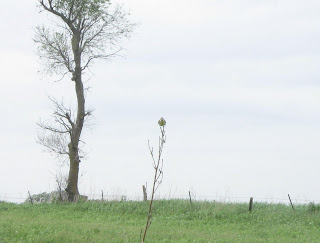 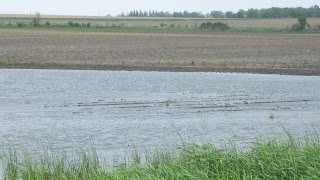 I also spotted a flooded field and took a careful look for some shore birds. They are rarely seen in the glaciated areas of southeastern Minnesota because lakes and untiled fields are few and far between. Then I spotted a few on the far side. Can you see them???? Just kidding I couldn't tell what they were even with my binoculars. Inching carefully up the trail I did get a few shots. Some kind of very small sandpipers methinks. Jeepers Creepers just little Peepers. 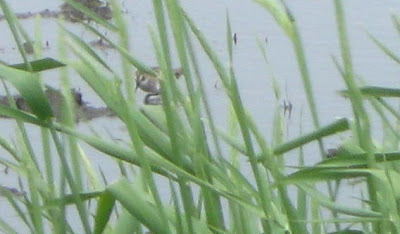 Well, I hope you enjoyed the ride. There's lot of different trails in this area. Maybe we can go again sometime.

Posted by troutbirder at 2:10 PM