Long ago and not so far away I was an upland game and waterfowl hunter.  Before, that is, my     knee  went bad and I switched to hunting birds with a camera and a notebook, it was a sport I thoroughly enjoyed. I owned a series of highly trained hunting dogs long before Baron, my GSD, arrived on the scene. Chessie was the name of our second dog. She was a full-blooded Chesapeake Bay retriever. Stockier and more broad-chested than Labs and Goldens, she had short, curly and somewhat oily hair. Chessie absolutely love being in the water. Cold didn't faze her at all. In other words, Chessapeakes are the perfect waterfowl retrieving machines. 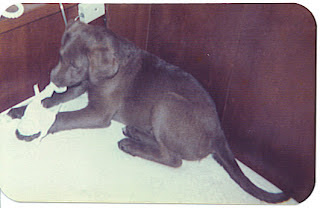 This morning, as Baron lay beside me and I looked out the window on a cold and dreary day my thoughts drifted back to the times when wonderful hunting dog companions led me through the fields, sloughs and around farm ponds. Come on along with me…. 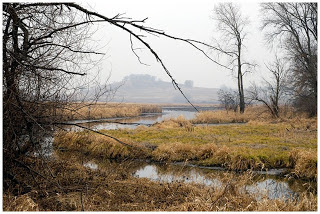 On one  particular day though, I was pheasant hunting. Chess   was   about eighteen months old and   in her first year of hunting. She  had already proven herself ready, willing, and able to retrieve ducks. Pheasants though would, perhaps, be another matter. That game bird required steely nerves and a good nose. I left school as quickly as I could getting out the back door that late afternoon. It was less than 2 miles to one of my favorite sloughs.There was a little creek running through about 30 acres of grassland and cover. Chessie started sniffing the ground right away. We had walked in for about 5 minutes when the first rooster flushed. It was a tough crossing shot. BANG! 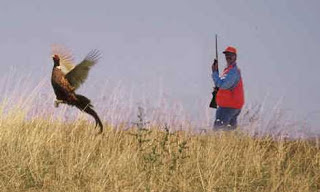 Hey... sometimes it's better to be lucky than good. The bird dropped into the grass about forty yards away. Chessie was right after it. I followed on the run. I watched    her    circle a bit and then head off to the creek. She went right in the water. "Well what can you expect from a water dog," I thought. At that point, I decided it was up to me to find the bird. I searched for ten minutes. Then I called the dog. She came reluctantly. I got down on all fours and putting my nose to the ground showed her the proper technique. No interest on her part whatsoever. Maybe a little amused smile though. Then she raced back to the creek The stream was about two feet wide there. It had a bank of about the same height, where it had cut through the meadow. Still in the water, Chess seemed particularly interested in this one spot. I thought, "do you suppose" and bent over to look down into the water. Nothing. Then, I lay on my stomach for a closer look. Reaching down, I parted the grass hanging over the bank and there it was..... a large hole in the bank. Mmmmm. The dog, now emboldened, began a low growl and put her head closer for a look. It was obviously some kind of den. Maybe a beaver? Or what? 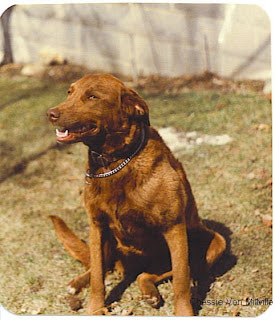 Now, at this point, one must consider common sense. Reaching into a den without knowing what one might encounter there raises some serious questions. To put into perspective what happened next, one must also take in account  several factors. The age of the hunter for one thing. How young, foolish and determined is he? How much faith does he have in a puppy who has never tracked a bird before? Well, as my uncle Walt often said, "Ve gets too soon alt unt too late schmart." The answer, dear reader, is that I reached into the dark, hoping to find feathers and not sharp teeth! My lucky day, it was feathers. Live and kicking feathers on a very smart pheasant. After doing what you have to do, I gave the bird to Chess to carry a bit . Then we began hunting again till dark sent us back home For the next ten years Chessie proved to be a wonderful hunter-companion. She was the best! I had learned on that first day in the field to trust her judgement implicitly. Here she is with a late season pheasant in the snow. 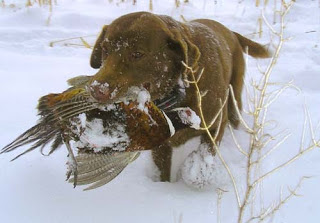 Posted by troutbirder at 2:30 AM