He was injured, captured, rehabilitated and set free with a transmitter on board to find out from whence he came into the Mississippi Valley.  His name was Whitey and he was a Golden Eagle..... 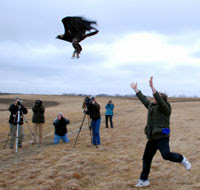 Golden eagles were thought to be relatively rare in the hill and valley region bordering the mighty Mississippi river valley between Minnesota and Wisconsin. Most experts believed they were lost wanderers from the Rocky Mountain west. More interested birders, better equipment and knowledge of differentiating the big brown eagle from their immature Bald Eagles cousins, has  changed that opinion.


Goldens nest all the way up to the Arctic coast in Alaska and Western Canada. Their range maps in the older field guides show nothing along the western edge of Hudson Bay. 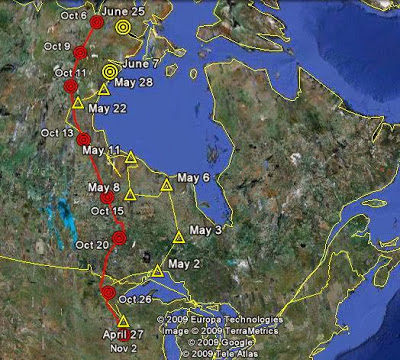 From late April to May, Whitey  flew from western Wisconsin north to Duluth Minnesota at the westernmost tip of Lake Superior. Then he crossed into Ontario, Canada. And then he kept on going and going and going. He flew past Churchill on the southern shore of Hudson Bay. Then further north along Hudson's Bays western edge. He traveled 2,382 miles, averaging 72 miles per day. His  longest one-day flight was 193 miles. From late May to early October, Whitey spent the summer wandering over an immense area of Nunavut — from the northern shore of Hudson Bay to a lake above the Arctic Circle. It had been a migration of astonishing proportions and came as a total surprise to everyone. Or as one of the experts said, “Wow!”


Then in the fall on October 7, he turned and headed back toward his winter home.  By early November, Whitey was back in southwestern Wisconsin after a 26-day, 1,750-mile migration.


Mark Martell, director of bird conservation for Audubon Minnesota said the finding has conservation implications. "These birds are cool, just cool," Martell said. "Here’s this huge, predatory bird that we weren’t even aware was here on a regular basis."


Their presence raises a serious issue — how best to protect them —. But more information is needed first.  Each year in late winter now under the direction and training of the National Eagle Center in Wabasha, Minnesota, volunteers including the Troutbirders, have participated in a Golden Eagle survey.  About a hundred have been counted each year in the  surveys for the last ten years. before they head north to breed. In more recent years other Goldens have also be tracked. 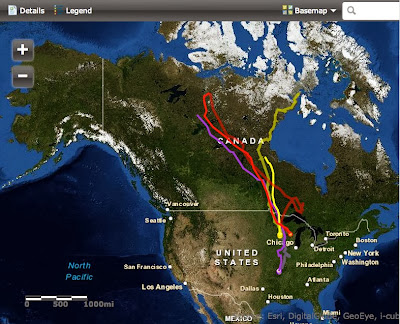 The Rocky Mountain West hosts many of these birds year around.   On a fly fishing trip to the high country in  Montana my brother Greg and I once counted over thirty Goldens along the road.   World class amateur photographer Mona (Montanagirl) graciously allowed me to use one of her many wonderful pictures. Golden eagles are truly golden.  The picture and the link to her nature blog is shown below. Take a look..... 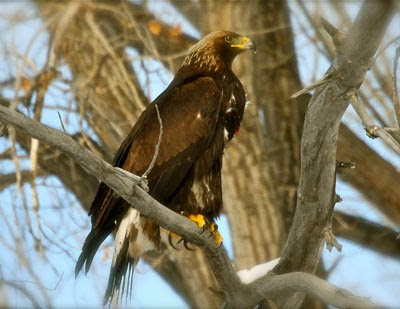 Posted by troutbirder at 5:14 AM