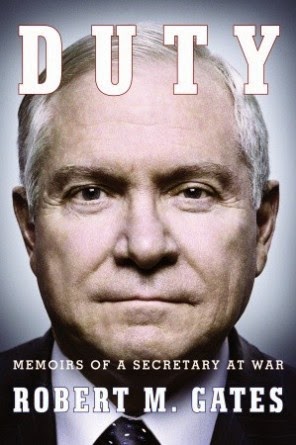 It’s about war, politics and Washington personalities so, naturally, it’s a big best seller and I read all 600 pages.  Whew! The book is Duty: Memoirs of a Secretary at War.  Written by former defense Secretary Robert Gates , it's possibly one of the strangest books in the memoir genre I’ve ever read. Truly  a captivating account of one insiders experience at the crossroads of two wars and the two very different Presidents he worked for.


Gates left Washington in 2011 with a reputation as a steady and sober  member  of the foreign policy establishment who had served eight presidents and was admired equally by Republicans and Democrats. After some forty years in various government positions in Washington he’s not likely to go back as this book cuts to the chase and pulls no punches on anything and anyone.  Like the author it’s honest, heartfelt (his devotion to America and its soldiers) and full of contradictions and inconsistencies.


In Duty, Gates takes the reader inside the war-room deliberations of Presidents George W. Bush and Barack Obama and delivers unsentimental assessments of each man’s temperament, intellect and management style. “It is difficult to imagine two more different men,” Gates writes.
He slams Congress for its grandstanding and gridlock. Repeatedly cuts Joe  Biden, the vice president, as loud, garrulous and obsessed with politics over substance. He trashed and tried to reform  the Pentagon itself for its bureaucratic ossification which had put America’s soldiers at greater risk in two wars.  Mr. Gates successfully performed  the task of turning around those two wars (Iraq and Afghanistan) that the U.S. was losing. His accomplishments are the more remarkable because he served two presidents whose attitudes toward the wars they were waging were as different as their political parties. George W. Bush wanted to win, and Barack Obama wanted to get out.


For those who love history and an insider view of American foreign policy you’ll love the revelations Gates provides on major decisions from late 2006 to 2011, during the last part of the George W. Bush administration and the first part of the Obama administration And when Gates, a lifelong Soviet expert, met face to face with the Russian president Vladimir Putin, he found himself staring not into the man’s soul (as Bush believed he had) but instead into the eyes of “a stone-cold killer.” And that's just a tidbit related to today's news.....
Posted by troutbirder at 4:47 AM