Last week, we got to see something wonderful - an eagle released back to the wild!


On April 14, two male eagles in Wabasha, Minnesota  were found tangled up on the ground. Fortunately, one of the National Eagle Center  staff lives nearby and was able to help with the rescue. A team of neighbors, friends and local law enforcement came together to separate the eagles. Since both eagles were males and nesting season is in full swing, their dispute was likely over nesting territory.


The eagles were taken to The Raptor Center in St Paul. They found that both of the eagles had puncture wounds from each other's talons, but would survive their injuries. One of the eagles had a 'brood patch', an area of bare skin that birds develop when incubating eggs. Since he was more likely the bird that was defending a nesting territory, he was returned to the same area for release. (The other bird was released near the Twin Cities to avoid another territorial dispute!)


Another injured and rehabilitated Bald Eagle is Angel.  Unable to fly she lives at the National Eagle Center and does educational work with students and others. I met her wading along the shore of the Mississippi River where she gets to take weekly hikes in the summer with a volunteer. What a sweetheart!  :) 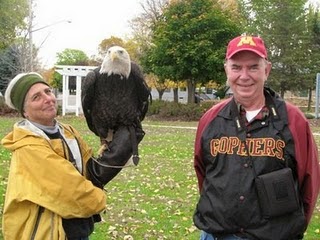 Posted by troutbirder at 6:34 AM