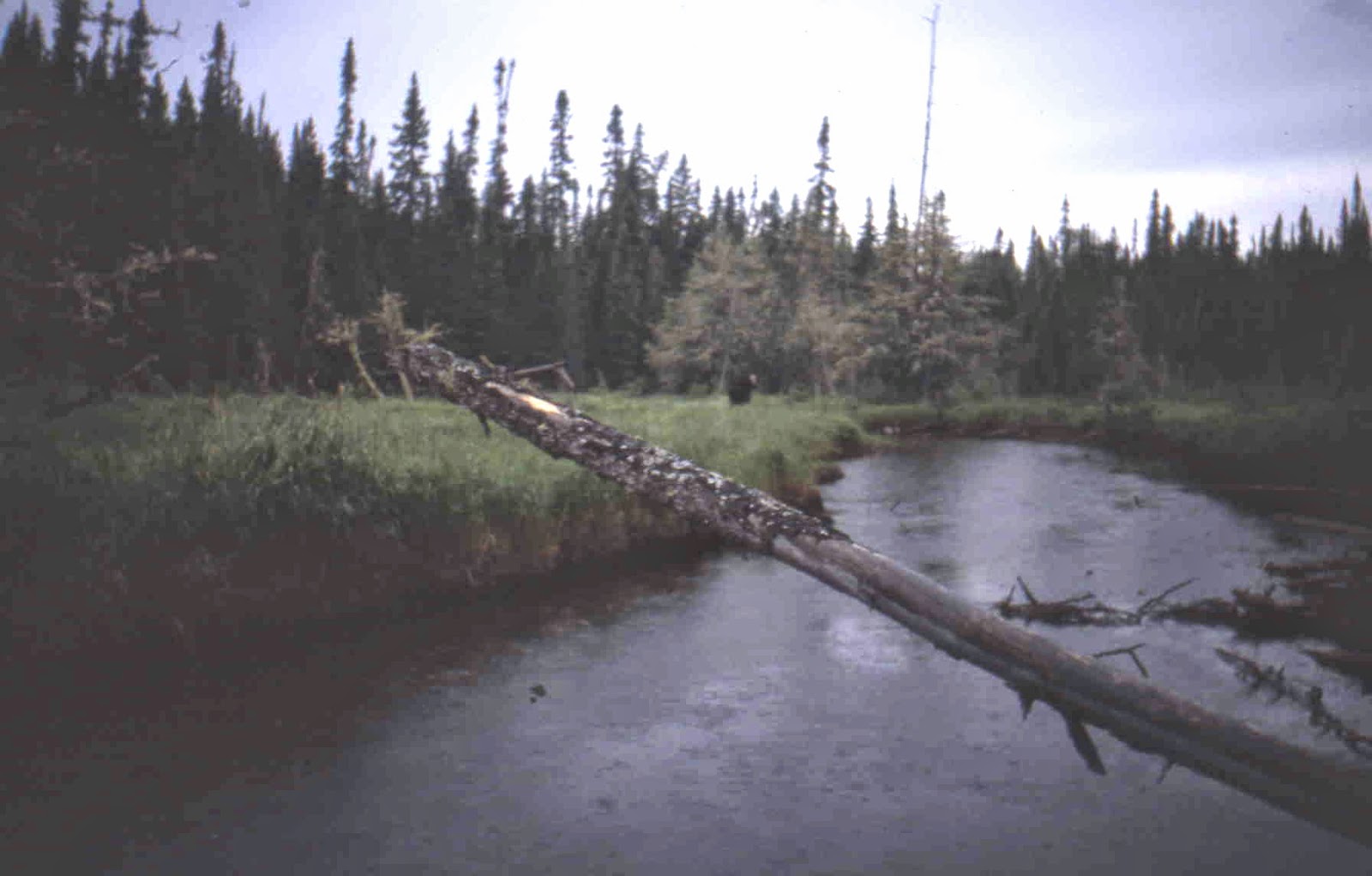 The next day we awoke eager to move on. We  followed a narrow winding little creek thru a series of beaver ponds, short portages, lifts over beaver dams and muddy shallow wades, finally into Steel Lake itself. Steel is a very long lake, maybe 12 miles,  oriented on a north south axis. There was a slight breeze and drizzle  out of the West as we followed the eastern shoreline at a leisurely pace.Wildlife abounded here. We saw two black bear, several moose, in shallow bays, munching in the water, beaver and even some playful otter along the way. They basically paid us a little attention perhaps never having seen humans before. 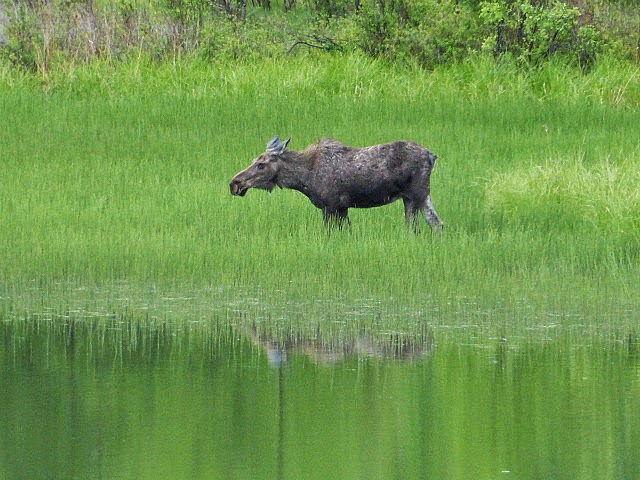 We had not, however, seen another soul since leaving Santoy Lake. The view ahead consisted of the lake and low hills on both shorelines with many small coves and rocky outcrops.


We didn’t fish much that day as it seemed a good opportunity to cover the miles. According to Ontario Fisheries, Steel Lake is excellent for Walleye, Northern Pike, Largemouth Bass, Smallmouth Bass, Lake Trout and Yellow Perch. Some days though you just have to keep moving on.
We had seen a few fishing boats "cached" along the shoreline previously that day and assumed some “locals” knew a less strenuous route into Steel Lake than we had pursued. A few isolated logging tracks were known to exist.  They certainly hadn't carried their boats and outboards up Diablo portage. The soreness of the previous day lessened as our muscles slowly became acclimated to the strain. 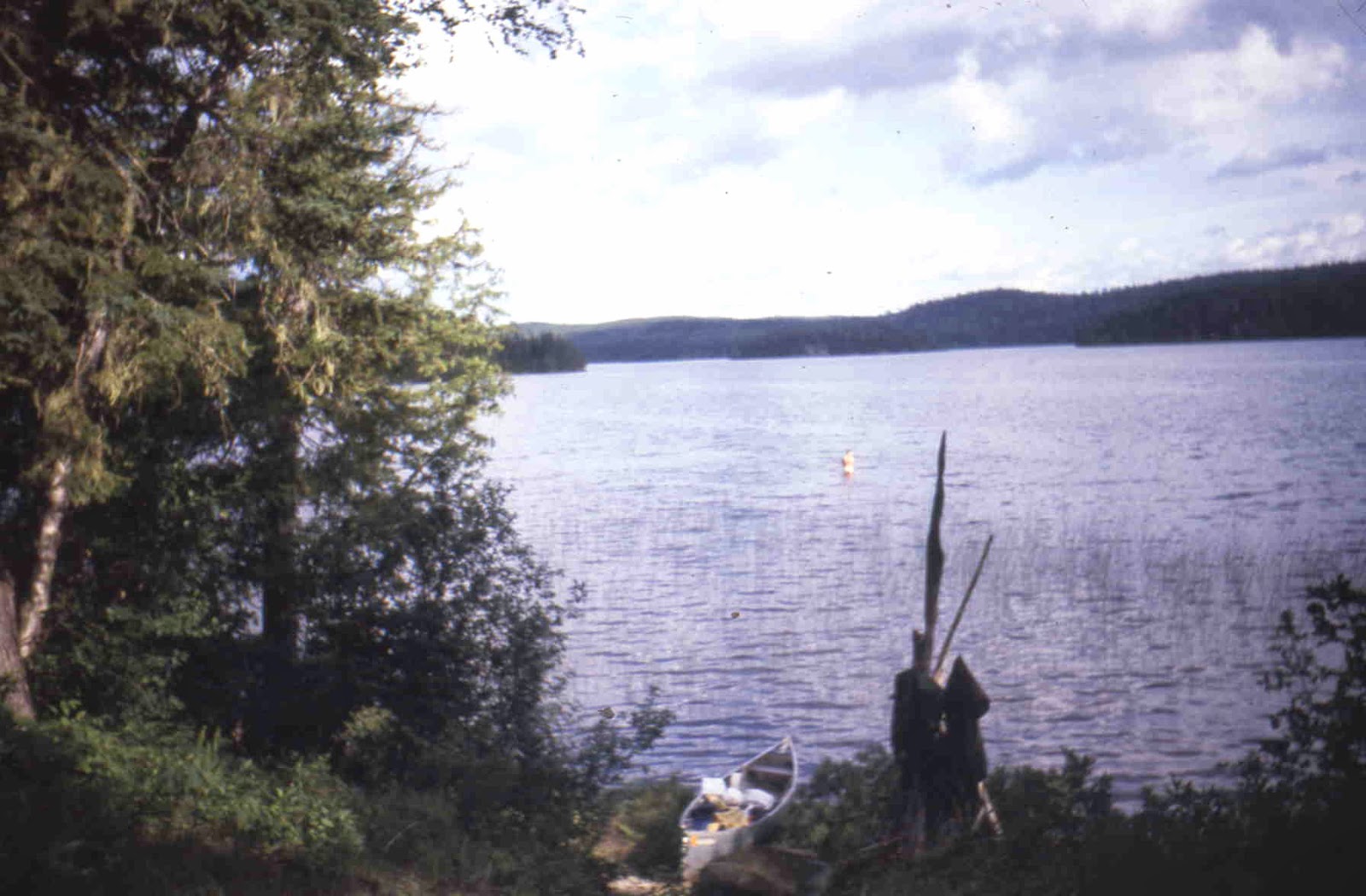 At about mid afternoon we pulled over about two thirds of the way up Steel and called it a day.  Some skinny dipping was in order to wash off the mud, sweat and assorted grime. That's my brother Greg straight out in the lake from the canoe. Obviously he had not been working on his suntan.It all felt wonderful! Then after setting up camp we dug into our dehydrated food that night for some variety. The  stroganoff was surprisingly good along with some hot cocoa and gorp. We had boiled water to fill our bottles. 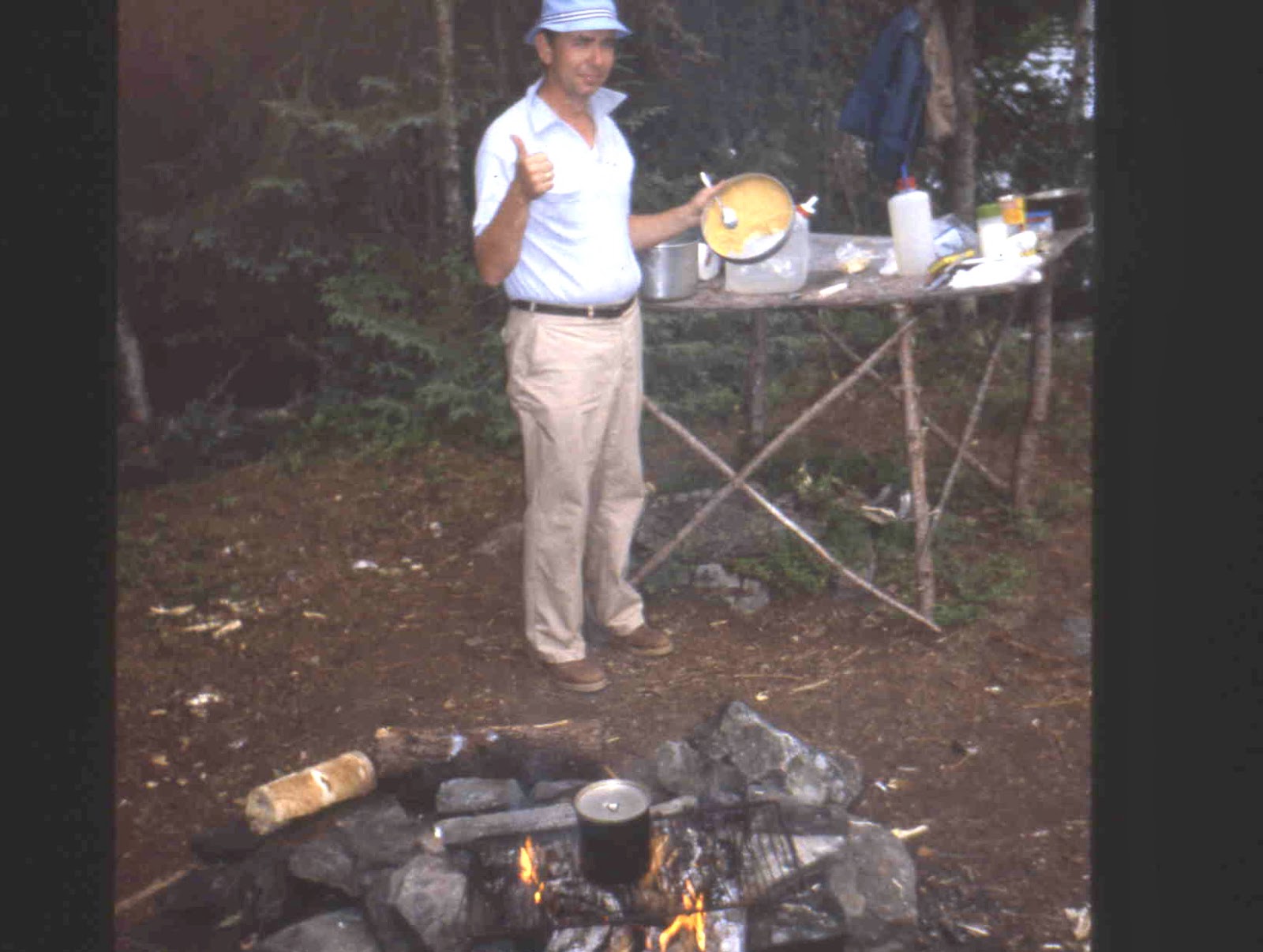 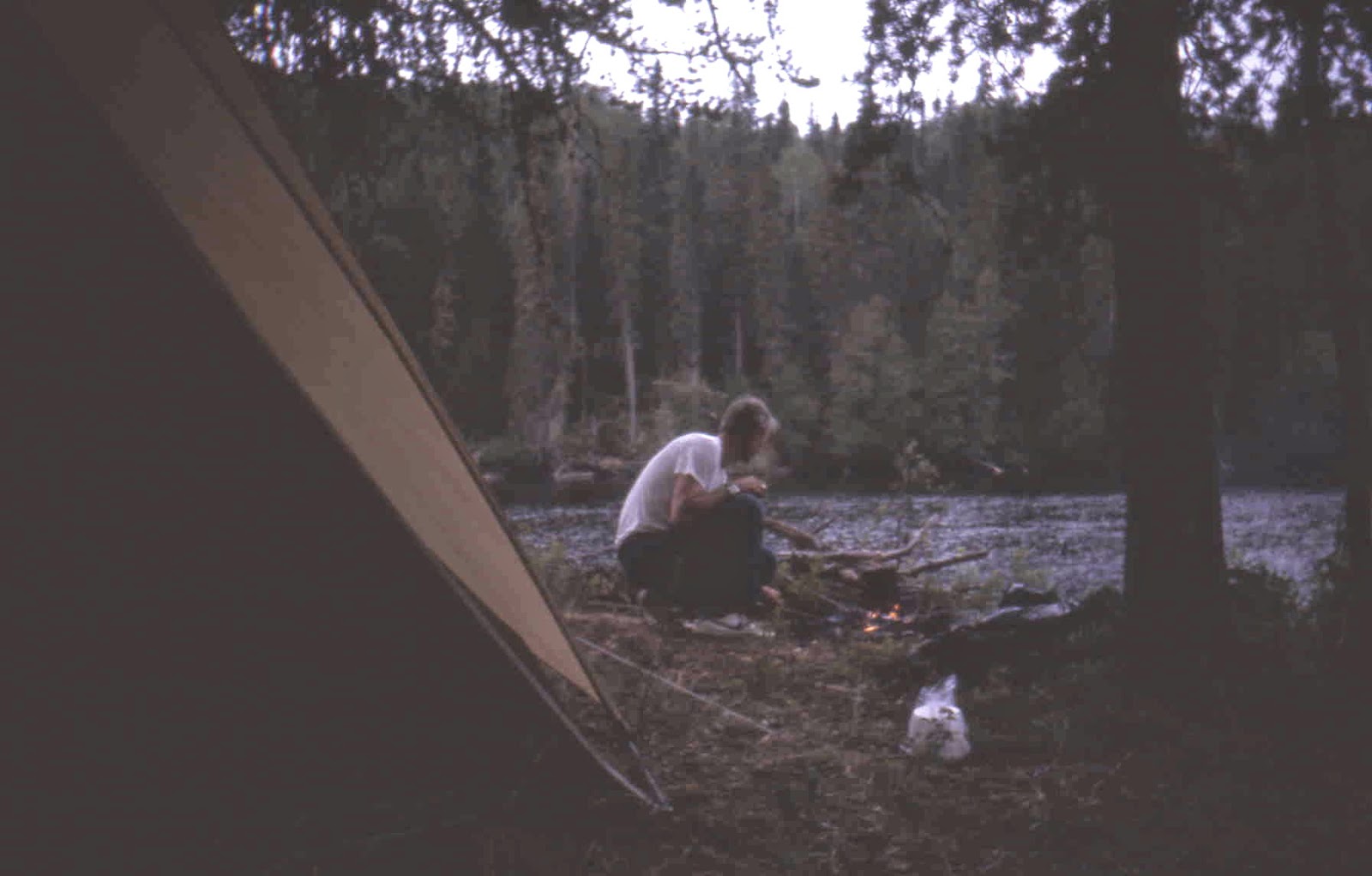 My brother Greg stoking the campfire

As the sun set over the western horizon we sat by our small campfire and listened to the sounds of the wilderness. 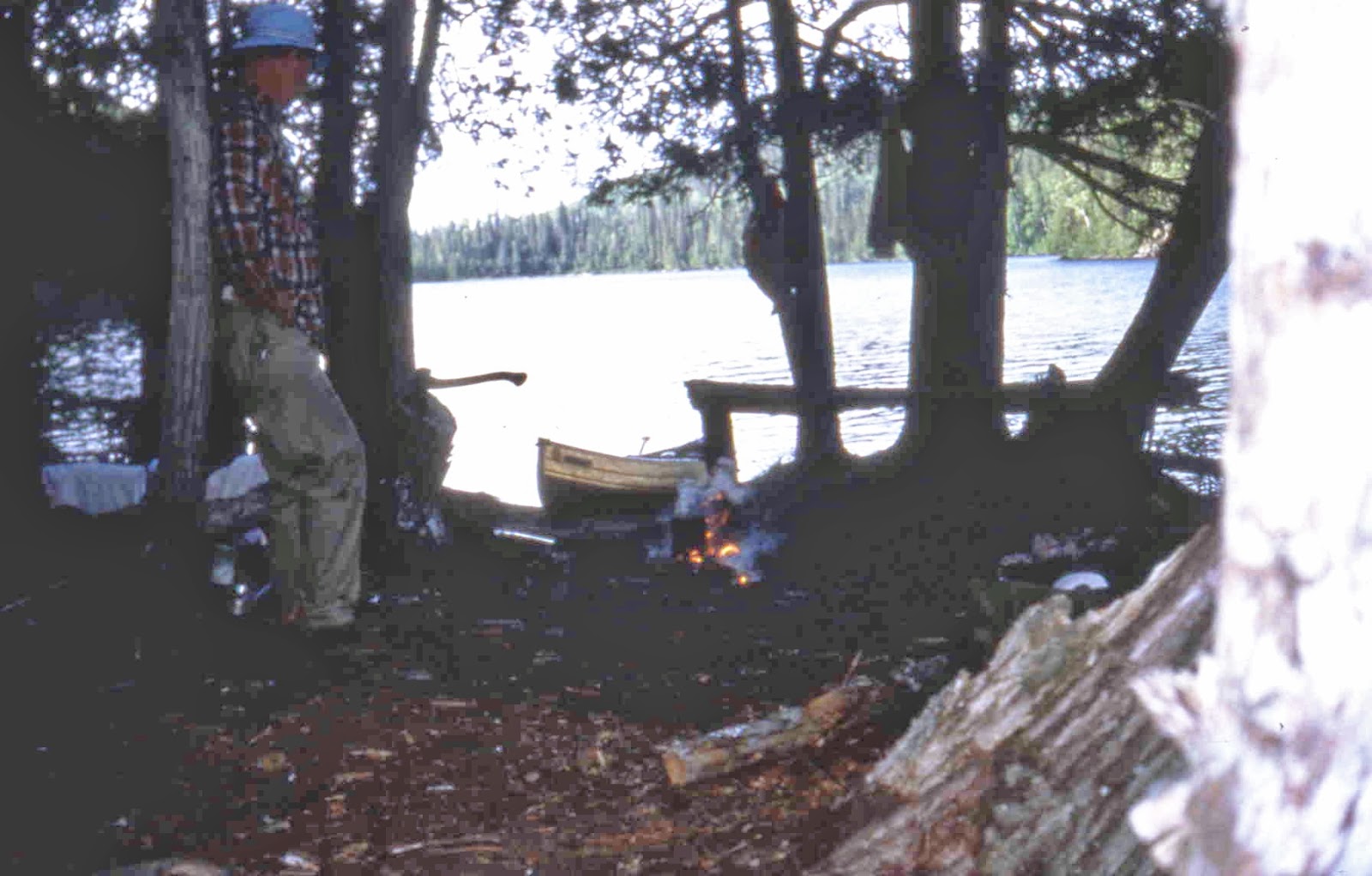 Some loons were calling long distance. Then a howling. Wolves? The lake was lapping along the shoreline. Quiet now. Time for bed...