It  all began when I was working at one St. Paul's first supermarkets in the late fifties. . I was in high school at the time and my school (Harding) had gone to split shifts due to overcrowding.  Seniors and juniors attended from 7 a.m. to noon.  Afternoons were free until my father decided I had too much slack time on my hands. A carryout boy at the supermarket was my destiny from 1:00 to 9:00 then supper and homework.  My eventual promotion to full time dairy case and frozen food stocker soon followed.  When the guys with the big dairy and frozen food trucks pulled up behind the store I volunteered to help them unload.  The result was two years of free ice cream and other frozen treats for me. I overdosed on it all... mostly ice cream. It isn't that I can't
or won't eat ice cream these fifty years later but now its only rarely. Enough is Enough.

Yes it's Mrs. T with the addiction.  Three hundred and sixty five days a year (or close).  That also counts visits to the "Dairy Queen."  Here we are "imbibing" at a local ice cream shop in Wisconsin...:) 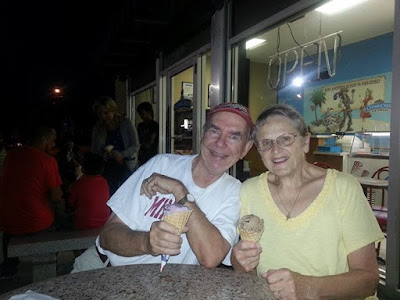 Posted by troutbirder at 7:23 AM