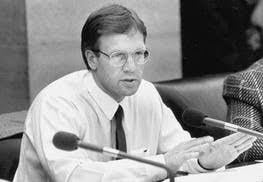 Sen. Duane Benson
In this day and age when public opinion the polls indicate that respect for congresses, presidents, lawyers and others involved in government regardless of party are at an all-time low it might be difficult to find any politician who might be considered a good man. Our small town newspaper editor recently wrote an editorial in the Spring Valley Tribune about a man who recently died who defied all of those stereotypes. The editor and owner of the aforementioned small town weekly newspaper is David Phillips. He is a man who I highly respect and is a former tennis player who I played with and against many times. His editorial I quote now word for word.
Radiant thoughts of lost ‘friend' cut through loom of rainy day.
"After work one rainy day last week, I decided to take a run on the Root River trail from Lanesboro, l despite the weather conditions. Although the trees were still bare, offering little protection, I thought the valleys surrounded by bluffs would offer a little buffer from the wind, softening the blow of the light rain.
As I made my way, west of Lanesboro, I spotted the Duane Benson farm. In the gray monotone atmosphere, it looked so different than I recalled because I had always pictured it is a radiant place with the sunshine acting as a spotlight highlighting this heavenly paradise on earth.
Part of that cheerful upbeat image is probably because of the man who lived there. Benson was such a radiant person who made a name for himself in so many do ways. He played in the NFL, operating as team captain of the Oakland Raiders in 1971 and playing in a Super Bowl. Then he served in the Minnesota legislature for more than a decade helping craft  bi-partisan bills, Minnesota Care being one which still addresses key issues today.
After he left politics, he became Executive Director of the Minnesota business partnership, a group of CEOs from Minnesota businesses, was a charter member of the Minnesota sports facilities Authority, which oversaw construction of the states professional football stadium and served in many other capacities including initiatives to further early learning as well as college education. Yet it wasn’t his accomplishments that touched me.
My memories aren’t of his time in the NFL, the state Legislature or State Boards. Instead, I recall brief moments we connected-on a school bus riding to the start of the trout trot race in a nearby small town, or when we sat across from each other during lunch when he was a guest speaker at the service club or at a foundation banquet when he brought me a drink before dinner where again he was a guest speaker.
Those encounters probably happened about a decade apart it it always seemed as if we had talked just the day before. We weren’t close enough to be considered friends but he treated me like a best friend every time I saw him. Those memories flooded my mind as I ran past his farm that didn’t have the Radiance on that wet day last week. The gloomy appearance wasn’t just from the gray skies above. My perception was colored by the fact that I also knew Benson would never be returning to the farm a place he enjoyed even preferred while he was out in the world making a name for himself, because he died earlier this year after a battle with cancer. He was 73 years old at his death shorter than the average lifetime of Americans today. Yet his life was far above in what he brought to the world.
Sometimes we focus on the length of our lives rather than the quality of our lives. However the key is what we do with our years rather than how many years we exist Benson packed a lot of living into his years on earth. His life is also a good reminder that the important things aren’t necessarily what we accomplish. What counts is how we treat people something many of us forget in the daily rush to keep up with all our worldly commitments.
I’ll never see Duane's smiling face in the physical world again but I’m sure memories of his thoughtfulness humor and warmth will pop back into my mind at times even if I may be in a gloomy rainy funk. Those images of Benson in my mind, will always exhibit the Radiance as if the sun is shining down from heaven on him.
As I, Troutbirder/teacher Ray, reflect on this man, I knew him pretty much as Dave describes him in his editorial. He came to my high school 12th grade classroom as a guest to talk about the legislature and politics and citizenship. He talked to those students as to what a duty as citizens we should all take seriously. He described politics as something that someday they might aspire to which could help their communities their state and their nation. He described politics as the honor and privilege of his life to serve. Nothing about football and his other famous accomplishments and yet I can only describe  his talk as inspirational. Someday  participate, he urged. I could’ve invited other political figures to my classrooms. But I didn’t. I didn’t want to invite men or women who might raise their finger’s in the air to see which way the wind was blowing so they could be reelected, or were were unwilling to compromise and work together with people of other  political principles to get things done.
Duane Benson was a very good man and a politician more of whom we could use today to  help make America less divided and even greater than it already is. Remember Winston Churchill’s great insight. “Democracy is the worst form of government, except for all the rest” 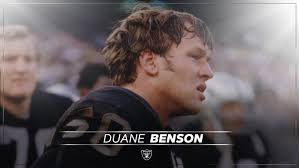 An Oakland Raider for all seasons....:)

Posted by troutbirder at 1:01 PM