The genesis of the idea began in February. We had taken a brief trip into the forests of northern Minnesota in search of owls and other boreal visitors from Canada. Our long time friends and new found birders, Gary and Rosie, joined us. http://baron-troutbirder.blogspot.com/2010/02/sax-zim-bog.html We had a great time.
Somewhere on that outing the idea of a venture to warmer climes emerged. Going to watch the Twins during spring training seemed like a good idea. We agreed to think about it. The clincher was when Tina at Tina's Bird Yarns http://tinasbirdyarns.blogspot.com/ noted that there was some great birding in the Fort Myers area. Later, she provided some detailed directions and helpful information about Sanibel Islands "Ding Darling National Wildlife Refuge," and the Audubon Societies "Corkscrew Swamp Refuge." We were on our way! 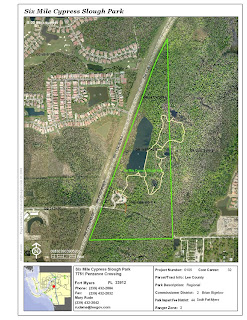 With Gary driving the rented car at speed down the four lane from the airport and me in the passenger seat, we all spotted a number unknown waders in the ditch. Given the fact of heavy traffic and not much of a shoulder no one yelled STOP! Still things looked good right from the beginning.
After lunch and checking in to our motel, we opted to visit a refuge right in the city called "Six Mile Slough." It had a boardwalk and lots of birds. 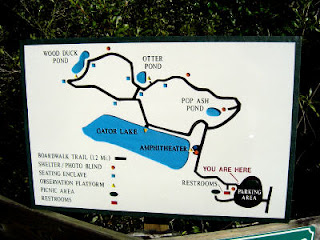 Everything was free except for a minimal $1 parking fee. We headed down the boardwalk anxious to see what we could find.

As we approached Gator Lake, sure enough Mrs. T yelled, "I see one!"
And there it was lying on a tiny island. The first "wild" alligator any of us had ever seen. And it was a "biggie." 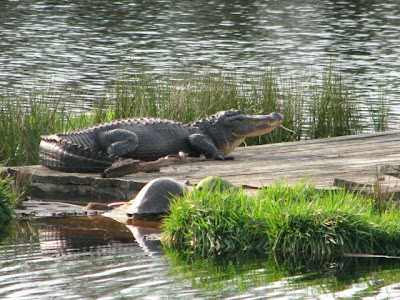 Along the shore of the the pond were strange looking white ibises with pink legs and curved orange bills. There were many of these beautiful birds where ever we went in Florida. Later, that evening, as we returned to the same spot, after completing the boardwalk "loop" we saw hundreds of large waders. There were ibises, herons & anhingas coming in to roost in the trees across the pond. 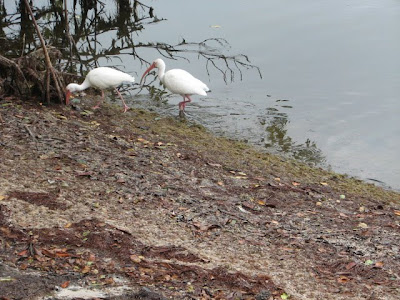 As I started down the path, I noticed Gary, with another birder, excitedly waving me on and pointing into the bushes. I saw lots of movement and began clicking my camera. It was a small flock of what turned out to be Northern Parulas. 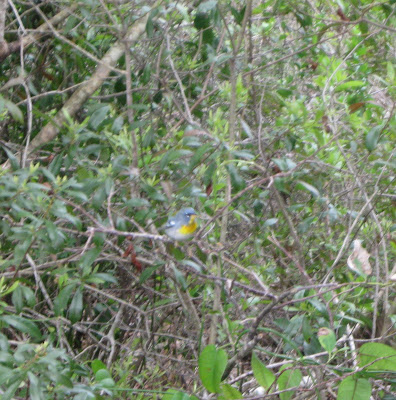 The stranger commented that this was only the second time in some thirty years of wintering in Florida that he had seen this beautiful warbler. "How long you folks been here?" he added. "About three hours," I replied. When he looked stunned, I threw in "BEGINNERS LUCK, NO DOUBT." We were to have a lot of that over the next 7 days! 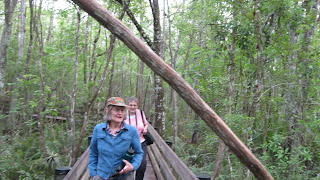 Rosie and Mrs T hurry down the boardwalk to catch up.
We all had the sensation of being in, for us, a truly exotic environment. Trees were beginning to leaf out everywhere and strange sounds emanated from all around us. I expected to see "The Creature From The Black Lagoon" at any moment. 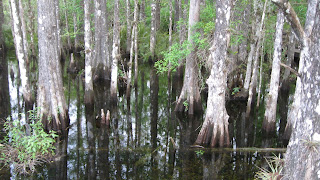 I wished I had brought tree and flower field guides as many unusual plants were seen everywhere. 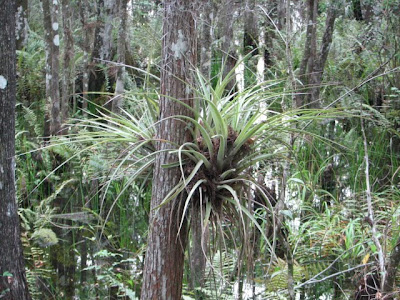 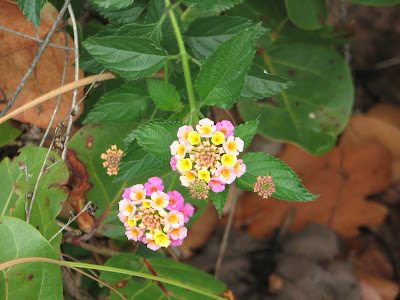 Six Mile Slough proved to be a great introduction to the wonders of Florida's natural world. We were all excited and ready to head off the next morning to the world famous "Ding Darling" Natural Wildlife Reserve on Sanibel Island. 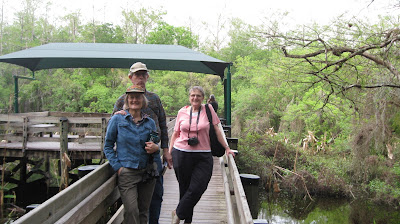 Posted by troutbirder at 3:34 PM