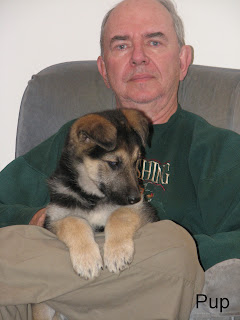 He started out as just a little fur ball in my lap but by the time Baron (my GSD) was a year old, he had a limp after strenuous activity. I took him to the vet and x-rays followed. The bad news was that he had a congenital defect in his back knee joints. This misalignment was compounded by the fact that Baron is big. Very big. A typical response when people meet him for the first time is, "OMG, I’ve never seen such a big German Shepherd." Think Marmeduke in size and temperment. Surgery was an option but he was already probably too old to have other than a remote chance of success. The vets advice was to limit his turning and jumping activities and try glucosomine. I did. 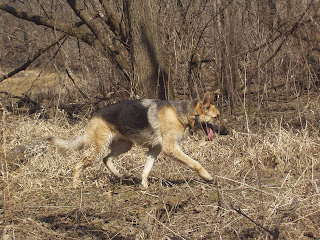 Now he is four and very rarely limps anymore. He loves to hike, run and chase small animals. The turning, twisting, jumping part is under strict control especially when he socializes with other dogs 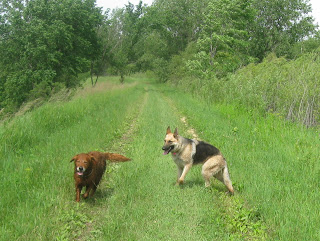 . He is not "cured" but managed. I’m now hopeful that Baron and I will be able to do our thing together for many years to come. 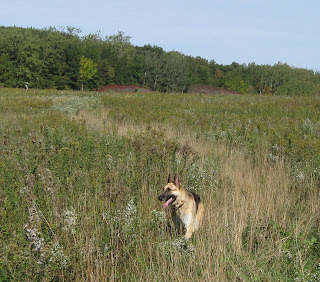 One of our favorite joint activities is "bird hiking" This, apparently, is not standard birding technique. Your typical little old man in tennis shoes, binoculars in hand, tip toes silently through the woods peering into the bushes for the sight of a titmouse. Baron and I use the standard grouse hunting technique. I had previously perfected this method in my upland bird hunting days, with all my labs and retrievers. Baron charges through the woods, sloughs and prairies flushing every mammal and bird in his way. They fly in all directions and not being an "on the wing photographer," I note where they land, call the dog to me and then approach for a picture. 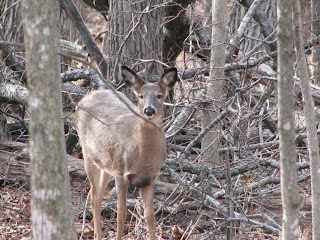 The only problem with this birding technique was deer. Baron loves to chase them. As a youngster I had taken him for a hike in the Maynard Underbakke State Forest. What a disaster that was. It’s a very densely forested area, and Baron was exploring ahead down the trail. He had been checking back with me every minute or so, until he disappeared without returning. I had called and called with no response. Following the trail, I noted some deeply imprinted deer tracks. It was as if a deer had been hard and fast. "Not good" I thought. I tracked and called down the trail for about a half a mile. Nothing. Then I returned to the truck and waited for an hour. Still nothing. I figured I had about two hours till dark, so I decided to return to my neighbors, borrow his four-wheeler, load it on a trailer, drive ten miles back to the woods and resume my search for lost puppy.
The access road to the forest, off the state highway, is nothing more than a field road about a half mile in length. . As I drove down that road, next to a plowed cornfield, I saw him slowly working his way toward me. What a relief! Could he have found his way ten miles home? I doubt it.... but he was obviously backtracking. When I stopped the truck and jumped out he saw me and came running. Big hugs and kisses all the way around.
He hopped in the cab and got his butt chewed all the way home. I know it didn't do anything for him but I felt better about it. Unfortunately I think the lesson learned on that outing was (1) chasing deer is a lot of fun, and (2) when push comes to shove my master will come and find me. Grrrrrr. 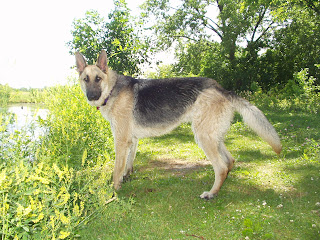 The next time we went to the Big Woods together, Mr Adventurer was wearing a shock collar. Yes, he still tried to chase deer for a while but a lesson was soon learned. Those big brown running animals somehow bite. Tough love, they call it. 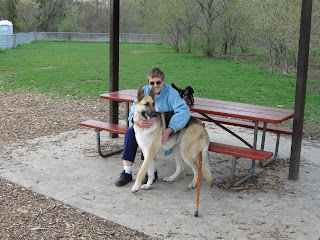