On the Minnesota Wisconsin  eastern border lies the beautiful St. Croix river. The St. Croix River was one of the original eight rivers to have significant portions placed under protection by the National Wild and Scenic Rivers Act of 1968.

Today it remains the Wild and Scenic River closest to a major metropolitan area in the country.  A clue in that direction would be the presence of eastern timberwolves in Minnesotas largest state park which likes astride the river for 21 miles. All of this only an hours drive from the Twin Cities.  We were lucky enough to spend a few days camping there recently with our friends Gary and Rosie. It was mid week mid Sept. and the park, with hundreds of campsites,  had very few campers. The weather was perfect for long hike and Baron got to go with us and even sleep in the camper. He was a very good boy . 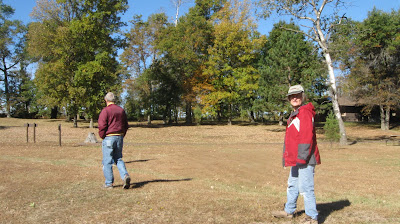 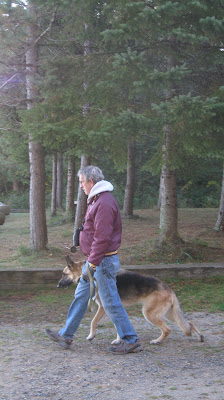 Here, he is taking an early morning walk with Gary. 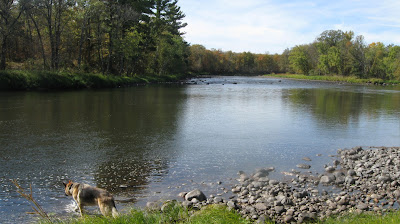 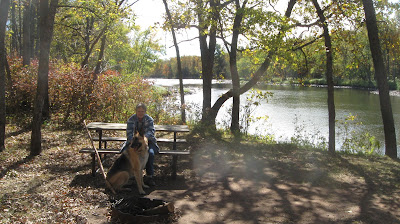 Mrs T. and Baron take a hiking break along the river.  One of my objectives on this trip was to survey the  damage from a tornado and huge storm, with straight line winds over a hundred miles and hour, which hit the park over a year ago. Thousands of acres of trees were downed, roads blocked and many buildingsdestroyed. Fortunately,in this case,   the park was closed due to political bickering. Minnesotas state government, except for emergency and police services was closed so their were no fatalities in the park. I'll show pictures of what happened in my next post....