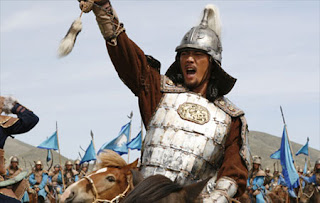 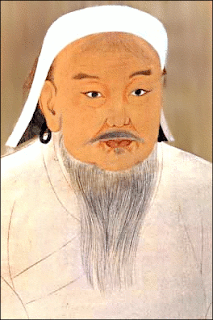 "Thou hast chosen war. That will happen which will happen, and what is to be we know not. God alone knows." Thus spake the Great Khan Ghenghis to his people and they rode forth from their desert homeland, on their small ponies, to conquer the world..... And they almost did. They created in centuries long past, the largest empire the world has ever seen. From China to India, from Russia in the north to Persia ind the south and further west into Central Europe, where they were finally turned back at the gates of Vienna on the Danube. That empire eventually faded away as all others have. Today, though, a small in population but independent nation (Mongolia) lies as a buffer between China and Russia.

When I heard of a program on the Golden Eagles of Mongolia being sponsored by the St. Paul Audobon Society, I was intrigued. Upon learning further, that the programed involved an Eagle Festival, where mounted hunters carried their trained eagles with them, I was even more fascinated. I headed north, one hundred miles to the Twin Cities, not to miss it.
Ron Winch and his wife Toni Melitsch gave the program based on their attendance at the festival. A "retired" 3M photographer, he now travels worldwide giving back to worthy conservation and environmental organizations as well as being a regular contributor to books and magazines. His goal is always entertainment, enlightenment, and education to inspire the viewers to become better stewards of the environment. He certainly succeeded based on what I saw. 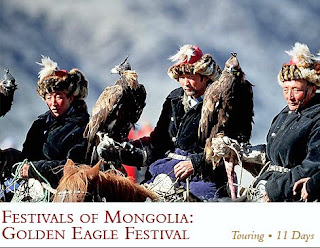 In recent times the eagle hunting tradition was dying out among the Kazhac people of Northwestern Mongolia. The eagle festival began, as such things often do, as a small event with the hope of preserving some of the old ways. Later, as interest revived, it began to achieve that goal and become a major tourist event as well. This year some 84 nomadic hunters rode on horseback from as far as 150 miles with an eagle on their arm for the event. And what an event it was. The settin of desert, mountains, colorful dress of the local people, their rounded tent homes (Gerts) and magnificent eagles shown through the means of digital photography, added up to a wonderful two hour program.  I was so glad I was able to  attend. 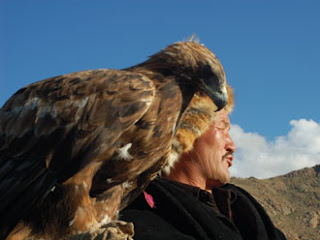 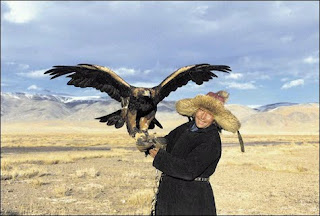 My own interest in golden eagles began several years ago by participating in the National Eagle Centers golden eagle survey. Over one hundred people were trained in identifying golden eagles from immature bald eagles. The goldens visit Minnesota from Canada in the winter and return to their habitat in the far north to breed in the summer. Our group identified over one hundred of these magnificent birds last year. I did learn, however, that the Mongolian birds were slightly larger than their Canadian cousins. Although my "team" spotted three goldens that  year, I've yet to have gotten close enough to take a decent picture with my little point and shoot. The Rocky Mountain West hosts many of these birds year around and world class amateur photographer Mona (Montanagirl) graciously allowed me to use one of her many wonderful pictures. 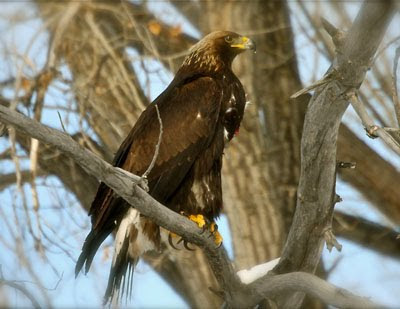 Posted by troutbirder at 4:30 PM