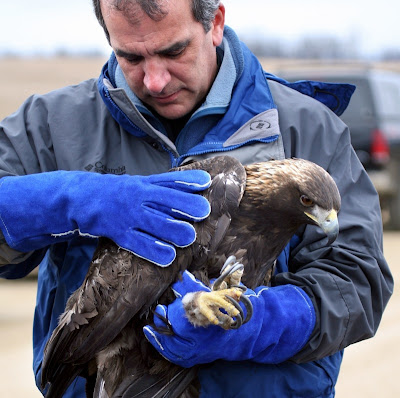 Continuing my posts on Golden Eagle research. Previously I had described Mrs T and my joining the Golden Eagle survey in southeastern Minnesota's Bluff Country. We spotted three. The grand total was over one hundred of those rare raptors in the 4 State area along the Mississippi.

This is Whitey, the Golden Eagle. He was accidentally caught in a legal trap in southwestern Wisconsin. Discovered by a bow hunter, he was brought to the National Eagle Center in Wabasha, Minnesota. From there he was immediately transferred to The Raptor Center at the University of Minnesota.
With expert care the bird’s leg was eventually repaired. Whitey was then scheduled to be released back into the wild. The National Eagle Center and several public and private agencies all joined together in a partnership to further study wintering golden eagles in the area. To aid the study, satellite transmitters were provided by the Minnesota DNR Non-Game Wildlife Division. 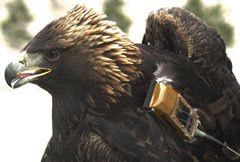 For years there has been speculation as to where the Goldens, who winter in the Mississippi river valley, come from. Do they migrate from their heartland in the mountain west, across the great plains to Minnesota. Or do they come from the far north in Canada. Whitey might be able to provide the answer. 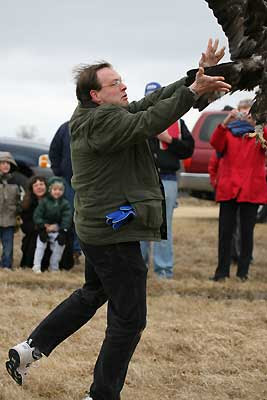 At The Raptor Center at the University of Minnesota a satellite transmitter was attached to the back of this golden eagle. Whitey was than brought to the release site near where he had been first trapped in Wisconsin. Then Scott Mehus, education director and Golden Eagle surveyor at the National Eagle Center, threw the bird back into the wild. Whitey took off, landed briefly in some nearby trees and then soared away, "free as a bird." 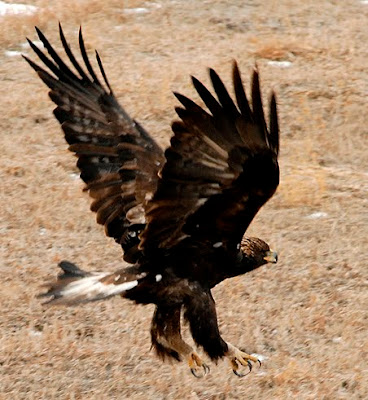 Next we will follow him as he leaves his wintering grounds, in the spring  and head off for parts unknown.
Next: Whitey's Journey
Posted by troutbirder at 7:20 AM