We were looking for Gold.  Looking for thought to be rare Golden Eagles that is.  After taking a class on identifying immature Bald Eagles from  Golden Eagles,   the Troutbirders set out on their assigned route in Winona county . The National Eagle Center was sponsoring the effort to determine how many Golden Eagles actually winter in Minnesota.  This big eagle was suspected to  associate with the hill and valley country of the unglaciated portions of southeastern Minnesota, southwestern Wisconsin and north eastern Iowa. Our route was in Minnesota. 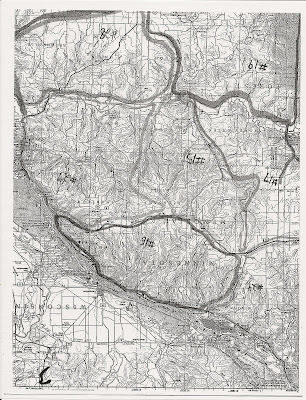 We had a wonderful five hour outing. Eileen, from the Eagle center,  was a great mentor and guide. She is a volunteer  who works with Scott Mehus the Education Director. Scott is in charge of the Centers Golden Eagle research project. 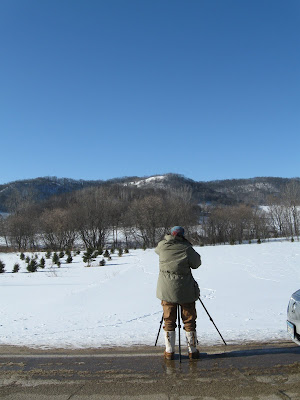 Here Eileen is searching along ridge lines above and adjacent to goat prairies. Goat prairies are south facing slopes which are dry and generally treeless (except for red cedar) The pioneers named them goat prairies due to the steepness. Golden eagles like to soar above them which gives them an open shot at their prey which consists of small mammals and the occasional wild turkey. Apparently they like their meat fresh as they are not known to scavenge in this wooded country. 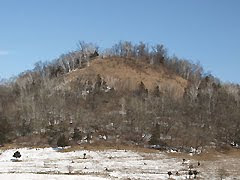 We clearly identified three Golden Eagles. One was mature and two first year goldens were also sighted. All three were soaring. We also saw several eagles perched on the inner portions of trees but distance made a positive identification impossible. The mature was identified by its dark coloration and the somewhat dihedral arch of its wings while soaring. The youngsters were playing chase and tag above us and the underneath white tail and wing markings were very clear. 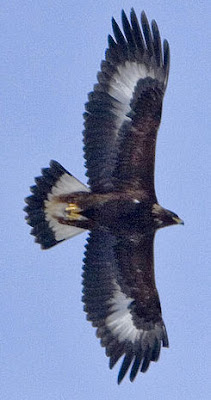 You might note that the head of the Golden is much smaller than the tail. In Bald Eagles the head and tail are approxiametly equal in size.

In addition, we counted 11 bald eagles (they are much more common along the Mississippi river), nine redtails, and two big flocks of wild turkeys and a herd of deer. 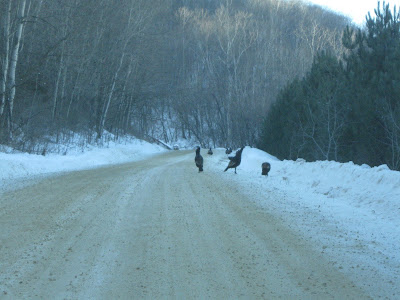 Another simple key to locating goldens is that if you see a flock of calm and reposed wild turkeys, it is unlikely a Golden Eagle is soaring nearby. 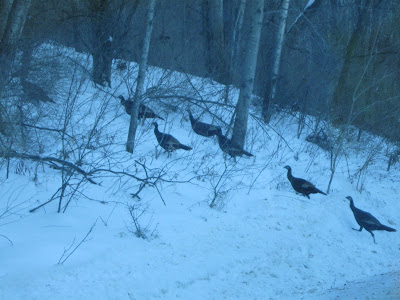 On the other hand, if they are fleeing in terror for cover, a Golden could be soaring above looking for a meal or Troutbirder might be driving down the road in their direction.  We were well satisfied to have spotted three Goldens on our outing, though memory took me back to the mountains above the Madison Valley in Montana where we saw several dozens.  Did these rare Minnesota visitors come from the Far West or someplace else? Only further research would provide the answer.  Tune in to our next post...:)
Posted by troutbirder at 5:38 AM