I do love good historical fiction and at the top of the  pantheon of writers in that genre stand three women.  The first for me was Colleen McCullough whose Master of Rome series, starting with The Grass Crown, brought me back to classical Rome like nothing else. Then very recently for me it was Hillary Mantel who described  the era of Henry VIII in all its intriguing complexity.


Then there is Sharon Kay Penman whose  specialty is the Middle Ages of Great Britain and France.    Her attention to detail in that time is such that you know the history always comes first, and the fiction is sprinkled in just enough to make the real events and people of that time period into a novel.

The first one I read was Christ and His Saints Slept which introduces the genesis of the Plantagenet dynasty as Queen Maude fights to secure her claim to the English throne.  Her writing is set during the period of Henry II and Eleanor of Aquitaine.  And what a series of novels it is…..


Time and Chance (2002),  continues the story of Eleanor of Aquitaine and her husband, and focuses on the rift between Henry II and Thomas Becket. Time and Chance spans a 15-year period from 1156 to 1171 as Henry II became estranged from his wife (although Eleanor and Henry have eight children during thirteen years), and from his close friend and advisor Thomas Becket. King Henry's decision to elevate Becket to the Archbishop of Canterbury becomes a fulcrum for discord between Henry and Eleanor. While reading this book I could still visualize Katherine Hepburn as Queen Eleanor in the film The Lion in Winter.

The Devil's Brood (2008), opens with the conflict between Henry II, his wife, and their four sons, which escalates into a decade of warfare and rebellion pitting the sons against the father and the brothers against each other while Eleanor spends the period imprisoned by Henry. Penman places the characters against a tightly woven tapestry of medieval life, personal conflict, and dramatic characters.

Which brings me to my most recent read, Lionheart (2011).  The book focuses on Richard the Lionheart's Crusades in the Holy Land and on what happened to Eleanor when she was finally released after spending sixteen years in a confinement. 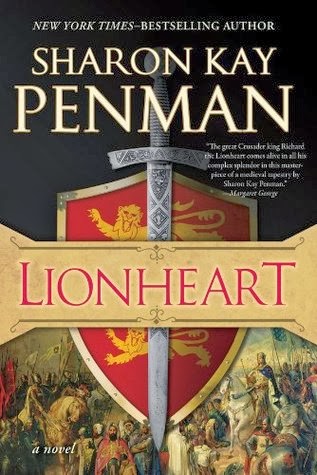 The book is a stunning story of a great medieval warrior-king, the accomplished and controversial son of Henry II and Eleanor of Aquitaine: Richard, Coeur de Lion. They were called "The Devil's Brood," though never to their faces. They were the four surviving sons of Henry Plantagenet and Eleanor of Aquitaine. With two such extraordinary parents, much was expected of them.

But the eldest-charming yet mercurial-would turn on his father and, like his brother Geoffrey, meet an early death. When Henry died, Richard would take the throne and, almost immediately, set off for the Holy Land. This was the Third Crusade, and it would be characterized by internecine warfare among the Christians and extraordinary campaigns against the Saracens. And, back in England, by the conniving of Richard's youngest brother, John, to steal his crown.

In Lionheart, Sharon Kay Penman displays her remarkable mastery authentic history  and human characterization.  The result is a powerful story of intrigue, war, and- surprisingly-effective diplomacy, played out against the roiling conflicts of love and loyalty, passion and treachery, all set against the rich textures of the Holy Land. It's as if you were there, in this strange, beguiling, vanished time that haunts the Middle East even today. Penman has triumphed in capturing its elusive essence and the remarkable story of  the English king called Lionheart.
Posted by troutbirder at 11:33 AM